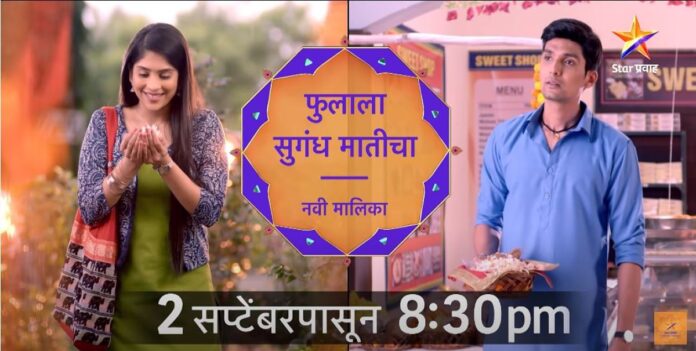 Just as the dark days of lockdown are being lifted TV shows and TV shootings are all geared up for shooting like the new STAR PRAVAH show ‘Fulala Sugandh Maticha’ which stars Harshad Atkari and Samruddhi Kelkar just like other shows which are starting like Sukh Mhanje Nakki Kaay Asta and Devaa Shree Ganesha. We are sure that ‘Fulala Sugandh Maticha’ will be a tent pole show of Star Pravah which beams the show at 8.20 pm from September 2 and the star pair of Harshad Atkari and Samruddhi Kelkar will be popular with the audiences.
The Saare Tujhyasaathi star Harshad  and Laxmi Sadaiv Mangalam star Samruddhi Kelkar star in a romantic love story as evident from the promos which dropped on social networks recently. Harshad is a boy who has studied up till 8 standard and runs a sweetmeat shop as contrast to Samruddhi who is a well-educated girl and from a rich background and so her father is opposed to this match and even Harshad’s mother is opposed to this match as she doesn’t want an educated girl for her son.
A kathak Exponent Samruddhi has starred in Laxmi Sadaiva Mangalam and is now on the Final 5 in the dance reality show Dholkichya Taalavar which will be telecast on September 2.
Harshad will be seen on the small screen after a long hiatus as he wanted to develop his personality and groom himself more and become more mature as an actor though he starred in shows like Durvaa and Anjali which will be quite popular.