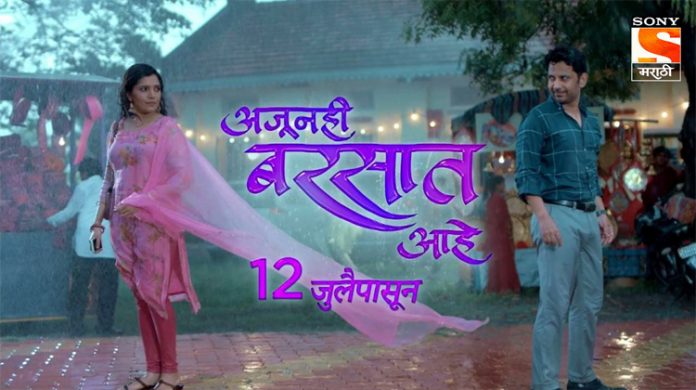 Sony Marathi has been constantly aiming to entertain their audience with new stories and unique combination. However after the promo launch of its upcoming serial “Ajunahi Barsat Ahe” starring Mukta Barve and Umesh Kamat has made the audience totally amazed by their chemistry. As Mukta and Umesh both are the well known faces of Marathi cine industry. Both the celebrities have given hit movies.

Mukta started her carrier from theatre plays. She appeared in a lead role for the first time in the Marathi play “Final Draft”. Since then she acted as a lead actress in various Marathi plays such as Hum To Tere Aashique Hain, Kabaddi Kabaddi, Chhapa Kata, Lovebirds and Codemantra. After her huge sucess in theatre acts she took a turn into marathi cine industry. Her films like mumbai Pune Mumbai, Double Seat and Jogwa nailed the hearts of audience.

Whereas Umesh also portrayed many memorable characters whether it could be in theatre or TV industry. Kaydyacha Bola was his first film. later, Timeplease, Lagna Pahave Karun were his hits movies. Duo of Mukta and Umesh was last seen together in “Lagna Pahave Karun” and “Eka lagnachi Dusri gostha” their comeback into “Ajunahi Barsat Ahe” as “Adi and Mira” has hitten the audience differently. Also it’s title caption states “प्रेमाला कुठे असते expiry date?” Has created much curiosity among the audience.

Hence audience can enjoy the First episode of this show on 12th June only on Sony Marathi.