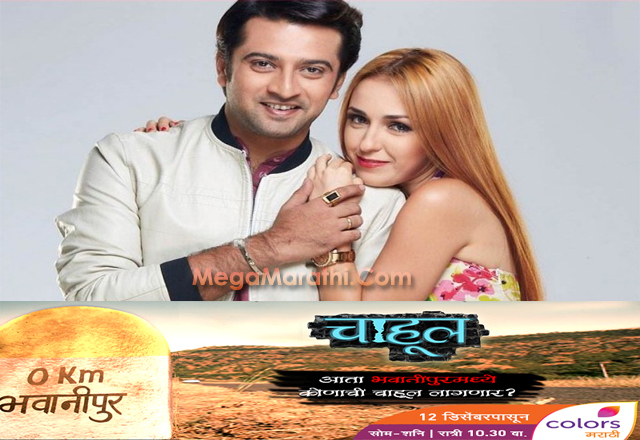 Are you ready for this suspense-thriller?
After regaling Marathi-speaking audiences with varied entertaining serials like Ganpati Bappa Morya, that threw light on the life and times of India’s most lovable Lord Ganesh, and Assa Sasar Surekh Bai, Colors Marathi is all set to take you on a thriller of a ride with its forthcoming serial Chahul (a soft, mysterious sound of footsteps).For the first time ever Colors Marathi will beam a suspense-thriller, Chahul, into your living rooms. The serial’s title itself gives one goosebumps in anticipation of mystery, thrill and bone-chilling entertainment.
As humans we all are intrigued about what lies beyond one’s consciousness. This intrigue not only leads to excitement but also evokes the fear of the unknown.
This suspense-thriller revolves around Sarjerao Bhosale  (Akshar Kothari), who has already made his place in your hearts in Kamla — who has returned to his native ‘Bhavanipur’ in Satara after a decade of pursuing higher studies abroad. Interestingly, he has not returned alone. He comes back home with his fiancee Jennifer. Sarjerao meets Jennifer during his stay abroad and the duo are madly in love withe each other.
Jennifer decides to follow her heart and in pursuit of love leaves behind her country, her people, to accompany Sarjerao to Bhavanipur, Satara, where they plan to enter wedlock.
No sooner does the couple land in ‘Bhavanipur’ they get overwhelmed by mysterious forces that prevent them from getting married. And thus begins the couple’s journey into the unknown, unimaginary, secret world that stumbles upon an unsuccessful love story.
Whose unsuccessful love story is this?
Not only will the audiences enjoy the secrets tumbling out of ‘Bhavanipur’ but also for the first time ever in the history of Marathi tele-serials will they see a foreigner — actor ‘Leezan’ essaying Jennifer’s character — in a lead role.
Akshar Kothari, Shashwati Pimpalkar, Madhav Abhyankar and Uma Gokhale make up the other lead actors in ‘Chahul’ that will hit Colors Marathi From 12 December Monday to Saturday at 10:30PM.