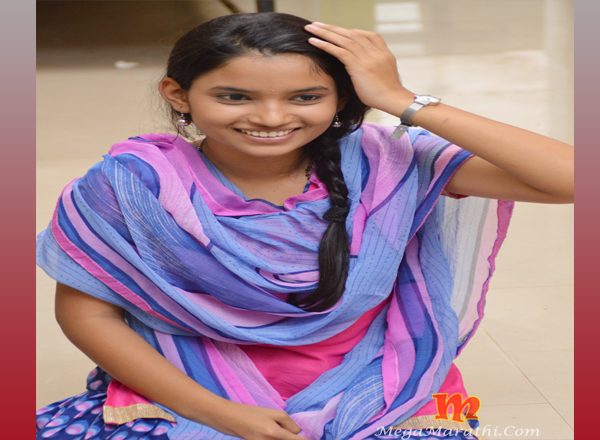 You remember Fandry cinema, don’t you? Shalu who was loved unconditionally by Jabya has grown elder. Means Rajeshwari Kharat is now a heroine. Itemgiri is her new upcoming Marathi cinema. In this she is casted with national award winner Hansraj Jagtap. We have got to know of a wild secret about her. That we are sharing with you today, that is 20 Kgs of Shrikhand for Rajeshwari Kharat… What is this scene … Wait and watch..

Rajeshwari Kharat is basically from Pune. While shooting Fandry she was in 8th standard. She went to P. Jog Education Trust school from 1st to 10th. Now she is in Sinhgad Senior College. She said that she had never even thought that she would work in a Movie but Fandry changed it all. She further said that after Fandry she received many movie offers but the timing wasn’t right. When she got the offer for ‘Itemgiri’ she loved the story soo she immediately agreed to do it. In this I’m the heroine… And it was a fun being one.

The shooting of the movie itemgiri was going on. It was nearly the second day of the shoot. Like usual the lunch used to be delivered on the set. But that didn’t have Rajeshwari’s favorite Shrikhand. Two consecutive days she mentioned her will to have Shrikhand…. And that day rose where everyone got her Shrikanda as a surprise. The director, co workers, producers etcetera put together there was 20 kilos of Shrikhand on the set. The entire day was sweet says Rajeshwari.

Itemgiri movie is teenagers love story. But how stuff happens in real life… Same way events take place in this movie. Rajeshwari further says that , I can still remember the first day of shooting. It was a scene in college. I enter the college and all the kids start staring at me such is the scene. But all the students were looking at me in such a way that I was feeling awkward. But director Pradeep Tonge and Mangesh Shendge gave me courage and I could get the scene shot. When you watch this scene you will definitely like it. Further Rajeshwari says that she has played the role of a girl named Srushti who goes from a small village to town and comes back to her village again.

Akshay Kumar, Deepika Padukone, Priyanka Chopra, Ashok Saraf, Lakshmikant Berde are her role models. Shrikhand is her favorite food item. But she loves home cooked food too. You might be seeing her on social media but today she confessed that she doesn’t have any account on Facebook. Whatever accounts you see are fake. But I just want to stay in touch with my fans hence I have a page.. that’s all. Now via Itemgiri you will see me in a different role… And you will love my new look.