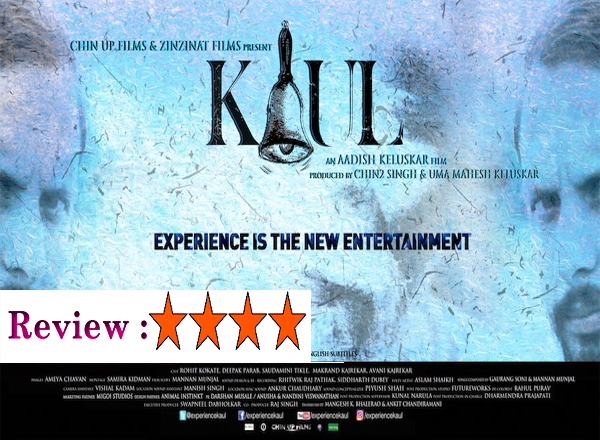 Kaul Review – A Film That Redefines The Definition Of Experience

The definition of cinema in India is restricted to love stories, action, item songs or suspense but the Marathi film Kaul goes beyond all this and engages the viewers throughout its running time. Choosing an out-of-the-box subject like this for his debut feature is a brave move on the part of young director Aadish Keluskar and he deserves all the appreciation. With a tagline that reads ‘Experience is the new entertainment’, says it all. This is a film that is sure to give a different experience altogether. Plus, it’s list of awards at film festivals stands testimony to the praise.
Kaul doesn’t have a specific plot per se. It’s story is open to different interpretations as per every viewer’s perception. So generalizing a particular perception doesn’t work for this film. But the film speaks about almost everything under the sky; humans, animals, nature, psychology, philosophy, feelings, expectations and more. It also has references to Gautam Buddha, Lord Krishna, Jesus Christ and nirvana and the references bring home the point that the filmmaker wants to make. There are chances that you might feel there’s no connection between anything happening onscreen but that’s because our way of watching films has been moulded in a specific way. Kaul is not like that. It hits your hard and leaves you speechless. Most importantly, it is the first time that something of this sort has been seen in Marathi cinema.
The research and effort that has gone into making this film shows in every frame. Instead of asking yourself why this particular scene is being shown onscreen, the fact that it’s visually enchanting drives home the message. It is a very technically sound film in terms of editing, background music and cinematography. The particular scene where the night suddently turns into day is so perfectly timed that you are left in awe of it. The scenic locales of Konkan have also been beautifully captured and they fit the story, making it more impactful.
Ultimately its all about how you perceive the film but one thing is for sure; none of the traditional film-viewing experiences are a part of this one but still, Kaul stays with you. The actors have done a good job too. However, you need a lot of patience to watch Kaul. There are minute details in every frame that need to bee paid attention to. The dialogues are brilliant and the strong point of the film. Listen to them carefully and you are sure to get thinking. Despite the film being labelled as experimental, there is no lack of entertainment in it.
If you are a formulaic film enthusiast, there’s nothing in this film for you. To experience Kaul, you have to put aside you regular definition of entertainment. Then, you are sure to be left spellbound. To sum it up, Kaul is a different film and it is important for more such films to be made.