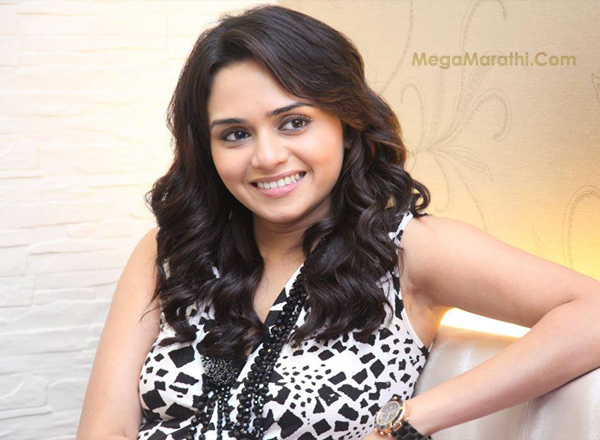 Amruta Khanvilkar born in Pune, Maharashtra on 23rd November 1984. She is good actor for Marathi as well as Bollywood films and serials. She has also won seventh season of the dance reality show Nach Baliye with her husband Himmanshoo A. Malhotra. She is popularly known for dancing and acting. She has given popular folk dance like Wajle Ki 12 and awesome acting for movie like Katyar Kaljat Ghusali. Here is collection of her filmography.

Amruta was a part of “Zee India’s Best Cinestars Ki Khoj”, a talent hunt show which was aired on Zee TV in 2004. Ranked third in the Talent Hunt contest, she went on to star in Sahara One’s TV Series Ada followed by series Time Bomb 9/11. She also anchored daily “Bollywood tonight” which aired on Zee Music.
Subsequently she began her career in Marathi films starting with Golmaal (Marathi Film) in 2006 . She was the leading lady of the Marathi film Saade Maade Teen (2007) which was produced by Zee Talkies and is one of the highest grossing Marathi films . She was also a part of the Marathi dance based reality show, Ekapeksha Ek.
She was in the music video Aye Hip Hopper by Ishq Bector.
She hosts the program, Comedy Express, on ETV-Marathi. She also hosted a dancing based reality show “Dance Maharastra Dance” aired on Zee Marathi along with ‘Siddharth Chandekar’.