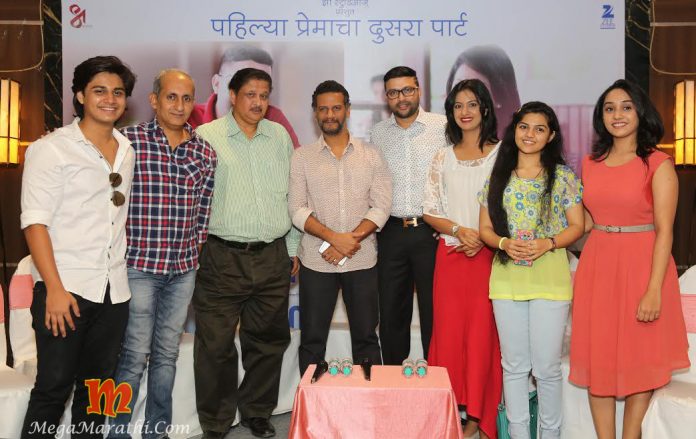 There is a special place for one’s first love in everybody’s life. It is said that  person can never forget her/his first love and it always remains ensconced in some corner of your heart.

When you fall in love with somebody there is always this curiosity to know more about that person and a question keeps tantalizing you: What must she be doing now?

Zee Studios’ New Year release Ti Sadhya Kay Karte is coming soon to once again remind you about your first love. Since the last few years Zee Studios has been bringing out special releases for its viewers and 2017 would be no different.

Beginning with some quality films like Natrang, Timepass, Lokmanya, Natsamrat, Zee Studios forthcoming production directed by Satish Rajwade Ti Sadhya Kay Karte is all set for a January 6 release in the New Year.

“Everybody falls in love at least once. For falling in love I understand we need two people and when you happen to be in love you always think about the other person. Even when you are in the company of your friends a tantalising thought, what must she be doing now (Ti Sadhya Kay Karte) crosses your mind. It is this thought and feeling that was kept in mind for making this film. And so Ti Sadhya Kay Karte is as much Ankush’s film as Tejashree’s. It was important for me to cast Ankush Chaudhari and Abhinay Berde who are paired opposite Tejashree Pradhan and Arya Ambekar, for the two phases of the film’s character as my lead actor,” director Satish Rajwade said at the presser.

The film is about a person’s first love. This is the story of Anurag and Tanvi; their first love, which begins during their school days, those wonder years and is continuing till this day. Love knows no boundaries of age. We all have that special one in our lives; they have that special place in our heart and lives. Anurag and Tanvi are no exceptions. Ti Sadhya Kay Karte is as much a story of these two as of those who have fallen in love.

But love manifests itself very slowly and the pain one undergoes delivers a strange pleasure as well to these lovers and director Satish Rajwade has tried to put this love story on celluloid with as much sincerity.

Ti Sadhya Kay Karte is about three phases of a love story that begins in school, then continues in college and still continues as one graduates out of college and enters the real life.

Beginning with the school phase Hridit Rajwade, Abhinay Berde and Ankush Chaudhari have essayed the three different roles for which their lead co-actors are Nirmohi Agnihotri, Arya Ambekar and Tejashree Pradhan. Sukanya Kulkarni-Mone, Sanjay Mone, Anuradha Rajadhyaksha, Prasad Barve and Tushar Dalvi are the others starring in the film.

Zee Studios’ Nikhil Sane and Asankhya Productions’ Pallavi Rajwade are the film’s producers. The film’s story and direction is by Satish Rajwade and screenplay and dialogues are written by Manasvini Lata Ravinder.

The film has four songs, the music for which has been composed by Nilesh Mohrir, Avinash Vishwajeet, and Mandar Apte. Arya Ambekar and Hrishikesh Ranade have given the playback for Zara Zara and Parikathechya Parya which have been penned by Ashwini Shende.

Hridayat Vaje Something has been written by Vishwajeet Joshi and Shrirang Godbole and playback for this song is given by Hridit Patankar, Rohit Raut and Arya Ambekar. It has received more than 5 lakh views in just a few days and has further aroused the curiosity for the film’s release.