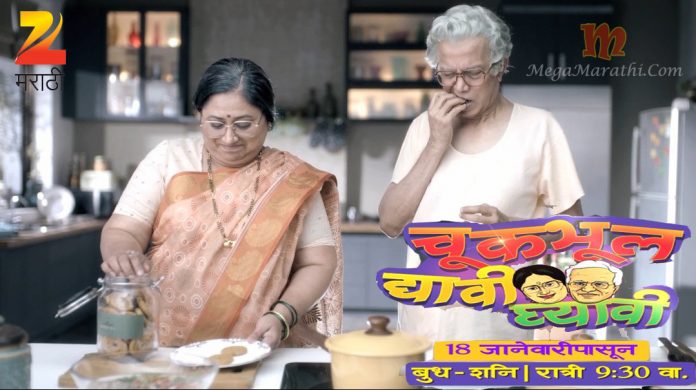 Yet, the insatiable actor, who played Gandhi in Bollywood blockbuster Lagey Raho Munnabhai, Prabhavalkar has never let his fans down. His versatility, charm and wit has enthralled his audience.

Now, in the New Year, Prabhavalkar will be ringing out the old and ringing in the new with Zee Marathi’s Chuk Bhool Dyavi Ghyavi, a light, romantic, comedy, actually a story of a septuagenarian couple, who rib each other, age being no bar for those who age with grace and love each other no end.

Accompanying the veteran actor, playing the character of Rajabhau in Chuk Bhool Dyavi Ghyavi, in this New Year Rom-Com with a difference, will be Sukanya Kulkarni Mone, playing his wife Malati, who will be also be seen on the small screen again, after the successful run of ‘Julun Yeti Reshimgathi.’

The story revolves around the bantering couple, where the groom teases his bride to call him young, as he proclaims he has only aged in years but is young at heart, leads to some delicious talk-back between the two.

Soon Zee Marathi’s viewers will be soon witnessing a promo teaser that will see the two fine actors engaging each other in sweet tiffs with each other. Renowned actor Manava Naik will be producing the serial for Zee Marathi and Swapnil Jaikar will be directing ‘Chuk Bhool Dyavi Ghyavi‘. The serial’s screenplay and dialogues are written by Madhugandha Kulkarni.

For the first time Prabhavalkar-Mone will be playing the lead actors of a serial and given their bounty of talent viewers will be in for a fantastic New Year opening. Most importantly, playback singer Suresh Wadkar too will be rendering the serial’s title song after a very long time as well.

MegaMarathi.Com sincerely wishes our readers get to hear more of the melodious voice of Wadkar.