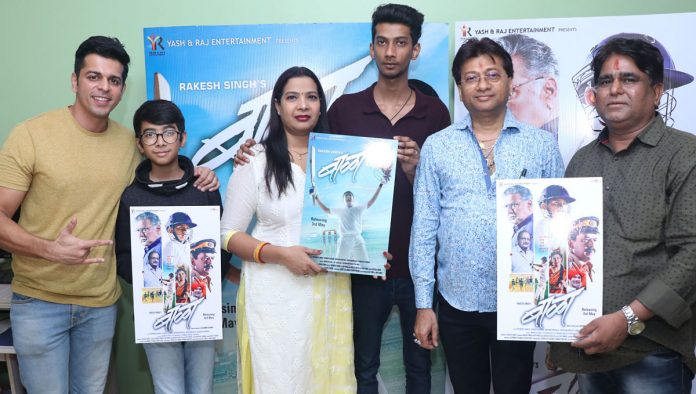 Cricket and movies are two things which are close to the heart of every Indian and both together are just milk and honey. This coincidence has just happened in the movie ‘Bala’. There may be many who have both these as their hobby, but there are few who have the determination to exercise their will to complete it. In the forthcoming film ‘Bala’, we see the story of a cricket crazy Bala, his determination and his dreams.

The film which is being released on the 3rd of May had a grand function to launch the music of the film. The function was attended by well-known personalities. The movie is produced, under the banner of ‘Yash and Raj Entertainment’, by producer Rakesh Singh, Sachindra Sharma has written and directed the movie. Along with stalwarts like Upendra Limaye, Kranti Redkar, Vikram Gokhale, Suhasini Mulay, Kamlesh Sawant, a new face Mihirish Joshi makes his debut, likewise artistes Yashwardhan-Rajwardhan,Ashish Gokhale and Jyoti Tayde will also be seen in the film.

Director Sachindra Sharma said that the film is not only based on cricket but also tells the story of a dream which a boy holds close to his heart, and the journey on this path by the tenacious young boy. He further said that this movie will definitely give a lot of inspiration and self-confidence to those who dream and also to fulfil that dream.The film has songs sung by Sonu Nigam, Adarsh Shinde, Rohit Raut, Nihar Shembekar and Urmila Dangar.

The lyrics written by Vijay Gamre have been set to music by Mahesh-Rakesh. ‘Ladalya re Ladalya’, ‘Vitthala’, ‘Dimag Dhila’, ‘Jinkuya Kheluya’ and ‘Halla Gulla’ are the four songs of different genre. Ajay Singh is the executive producer. Cinematography is by R.R. Prince and editing by Abhijit Kundar. The choreography is by Vishnu Deva, Habiba Rehman and Phulwa Khamkar. Costumes are by Chaitrali Dongre.

The film ‘Bala’ is being released on the 3rd of May.