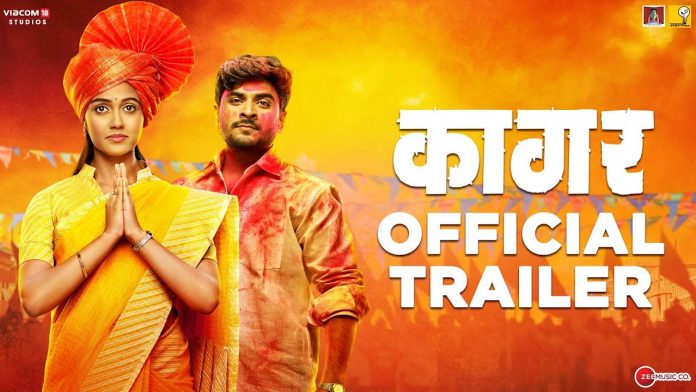 The election fever is all around us and the politicians are veering towards fresh new talent for public duty instead of the old guard . And now on the backdrop of rural politics  in a village comes a realistic film ’Kagaar’  from presenters VIACOM 18 STUDIOS and under the auspices of  VIACOM 18 directed by National Award winner Makarand Mane which is set to release 26 April all over Maharashtra.

From getting national recognition from her first film ‘Sairat’ the perky Rinku Rajguru returns after three years on the big screen. “ From smoldering under the hot sun to her  colorful dreams splashed all over and new makes way for the old is the war-cry of Rinku Rajguru. The teaser of the film has been appreciated a great deal by her fans and viewers. And now the trailer has been released.

Rural Politics, women empowerment, and the realistic portrayal of the social pathos is  the subject of the film stars Rinku in a  very powerful role. Young newbie  Shubhankar Tawde is making his debut in the film. In the various challenges that we come across in life and relationships the one thing that keeps our relationships strong is love for each other and trust for each other. And the one thing that makes it go awry is politics.for personal gains. On one side is sensitive love and on the other side is the chessboard of politics that is realistic and affects you severely . This film releases on April 26.