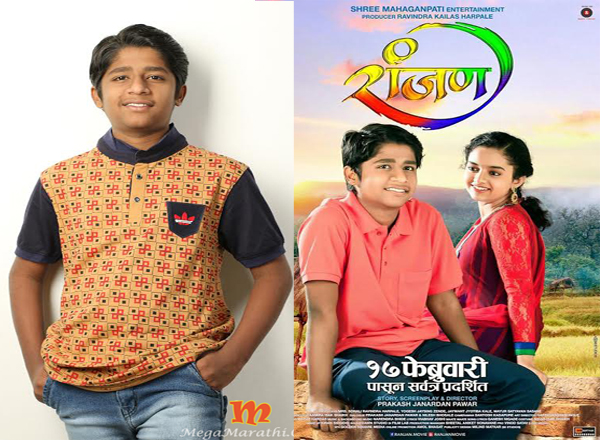 There is more to the forthcoming February 17 release of Marathi film ‘Ranjan’ than just awesome singing by Ajay Gogavale. While ‘Lagira Zala Ji‘ has become a rage on social media, the film is also making the round for its social message as well as the leading pair of Yash Sanjay Kulkarni and Gauri Suhas Kulkarni, who play the chief protagonists of the film that deals with teenage love.

MegaMarathi caught up with the two hot debutants for a tete-a-tete with them about their experience of working in Ranjan and their debut.

Here’s what Yash told us about his debut and experience of shooting for the big screen.

Yash Kulkarni  : I was always interested in acting and would often participate in school’s social gatherings and in plays. My uncle Nitin Dikshit, who was the writer-director for Marathi film Avatarachi Goshta, gave me my first break in the film. I played Manglya’s role in the film.

Yash Kulkarni  : Prakash Sir (Ranjan’s director Prakash Janardhan Pawar) saw my role in ‘Avatarachi Goshta’ and had liked my role. He wanted a fresh face for Ranjan and when Somnath Vaishnav, who was in the production team of Avatarachi Goshta, gave him my number he called me and asked me to meet him for an audition.

Fortunately, he liked my audition and Prakash Sir selected me for the film’s lead role. I am very thankful to Prakash Sir for believing in me and giving me this opportunity.

Yash Kulkarni  : It was a fantastic experience. I enjoyed shooting for the film and got an opportunity to work with senior actors in the industry. I have just begun my film career and I have to learn a lot to establish myself in the industry. I am sure with blessings of people like Prakash Sir and Harpale Sir and all the senior artistes who helped me in this industry till today I will be able to make a mark.

Yash Kulkarni : Ranjan offers a very different but unique perspective of how society looks at teenagers and children. The film also offers a solid social message.

Let me not reveal more about Ranjan; instead I will rather request all the readers and their family to come and watch Ranjan at the nearest theatre near them.