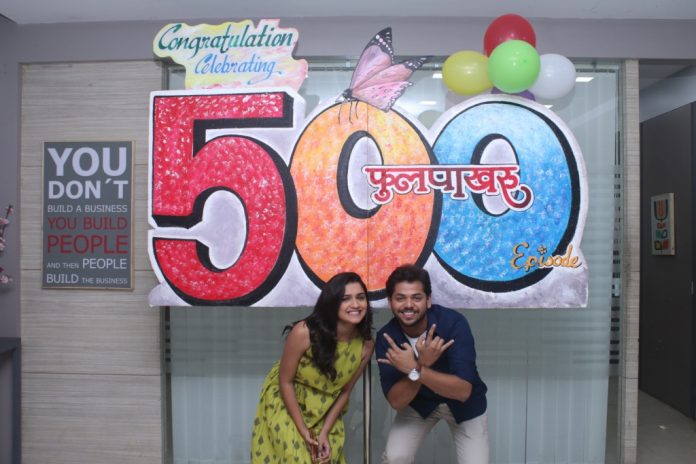 The channel ZEE Yuva channel has caught  the imagination of audiences in a very short time. And their premier show ‘Phulpakhru’ has gathered the appreciation right on the top of the charts. This show about innocent love is well liked by the audiences and the lead characters of Maanas and Vaidehi are very popular with the audiences. Even on the social media the appreciation for the show has been garnered by lovers of the show and fans. This show recently completed 500 episodes. And it was celebrated in a grand style with a party and cutting of a cake. The entire cast and crew was present on the occasion and they were thanked profusely for making the show a big hit.

During the thanks giving and the cutting of the cake, each member of the cast and crew were given a piece of cake to savor. The audiences have unquestionable love for the show and they are backing the show undoubtedly. The artistes of the show said that the show and the characters in the show have received positive vibes and good response.

Speaking about the 500 episodes of the show, Hruta Durgule says, “ Attaining the record of 500 episodes is a very happy occasion for all of us and the audiences have given all their love for the Phulphakru show. We celebrated the occasion in the presence of the entire cast and crew because of whom we reached the summit of 500 episodes and I would like to thank all those associated with the show and especially the loyal audiences of the show and hope that they would continue to shower love and appreciation on our show”.

Speaking about the love of the audiences of the show, the lead  artiste Manas played by Yashoman Apte says, “ We all are happy to achieve this record of 500 episodes and we are all happy to thank the audiences who have showered so much love and appreciation on us .This was a happy journey and hope that we will conquer more such high records”.