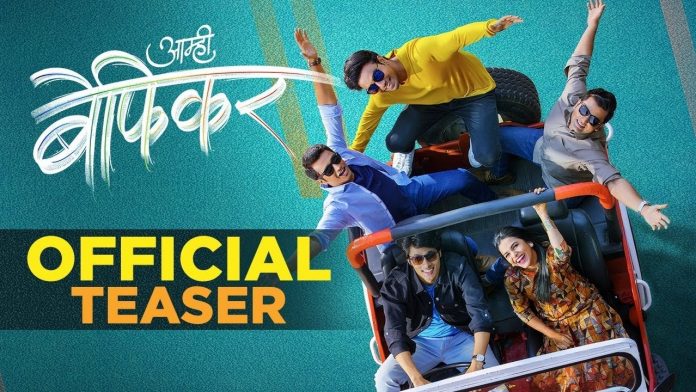 The entertaining story of college-going friends, ‘Aamhi Befikar’ recently had its teaser launched on social media networks to a very good response. The film with very good cinematography, powerful dialogues and a zany story which releases on March 1 will definitely be liked by the audiences. Under the banner of Harihar Films, producers Nagesh Mishra, Antriksh Choudhary, Kavishwar Marathe, and Rohit Chavan, have produced the film along with co-producer Rohit Patil.

The film is directed by Kavishwar Marathe. The film has a fresh new pair in Suyog Gorhe and Mitali Mayekar. Suyog and Mitali have been seen before in many TV shows but this is their first pairing in a film. Along with them Rahul Patil, Swapnil Kale, and Akshay Hadke are in prominent roles. The music is by Prashant Adangale and the DOP is Chitaranjan Dhal. The film revolves around the quest for more and then losing out on more is the theme of the film. And utilizing the gained experience to taste success is the plot of the film. The film talks about the lives and thoughts of the youth today and that’s why the look of the film is also youthful as evident from the teaser. A Good story, good performances, a youthful story, entertaining dialogues, and technically slick the audiences will definitely say ‘Aamhi Befikar’ after seeing ‘Aamhi Befikar’ without any doubt.