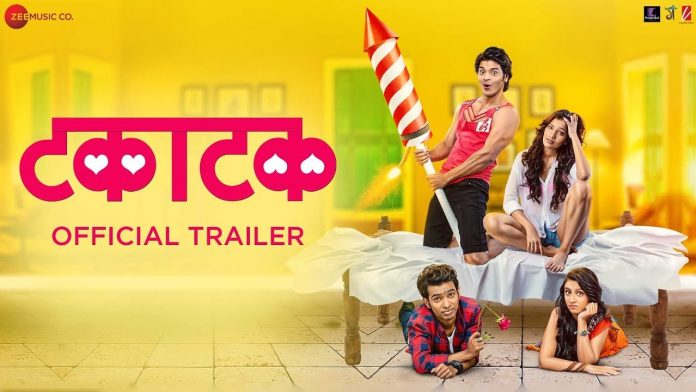 On the auspicious occasion of Gudi Padwa, the first poster of the film Takatak was unveiled. Egged on by the positive response to the poster, now the awe- inspiring trailer of the film has also been unveiled. The buzz about director Milind Kavade’s hilarious film Takatak is on the increase.

Milind Kavade had earlier directed successful films like Yedyanchi Jatra, 1234, Just Gammat and Shinma. In Takatak, Prathamesh Parab (of Time Pass fame) plays the lead. Produced by Purple Bull Entertainment Private Limited, V. Patke Films and Gaonwala Creations, Milind Kavade is renowned for his ability to handle serious issues in a light hearted style effortlessly in his films and the trailer tells us what is in store for the viewers this time around.

The plot of Takatak may seem to be too bold and ahead of its time for the Marathi Cinema audiences, which will now get to see unabashed sex comedy hitherto not seen in Marathi Cinema. The plus point of the film is that the way the subject has been tackled with a touch of comedy without in any way trying to incorporate titillating vulgarity in the name of sex comedy. The director has also set out to drive home an important message to the society through various characters which unfold in the film.

Om Prakash Bhatt, Sujay Shankarwar, Rabi Bahry, Inderjeet Singh, Ajay Thakur, Dhananjay Singh Masoom and Ravindra Chaubey are the producers of the film. Prathamesh Parab has been teamed opposite newcomer Ritika Shrotri and the audience will get to acquaint themselves with the hot and sizzling chemistry between them. Prathamesh has created a separate fan following of his own for himself ever since he stepped into films with Time Pass and for his fans, Takatak will prove to be an enriching experience by itself. Besides Prathamesh Parab and Ritika, the film also stars Abhijeet Aamkar, Pranali Bhalerao, Bharat Ganeshpure, Pradeep Patwardhan and Ananda Karyekar.

Besides directing the film, Milind Kavade has also joined hands with producer Ajay Thakur to write the humorous story as well as the screenplay for the film. The meaningful dialogues of the film have been penned by Sanjay Navgire while Jay Atre has written the songs for the love story, sung by Anand Shinde and Shruti Rane. Varun Likhte has composed the music for the film. Hazrat Shaikh (Wali) is the DOP of the film which has been shot in exotic locales in Goa, Mumbai, Thane and Bhor. The film is slated for release all over on 28th June 2019.