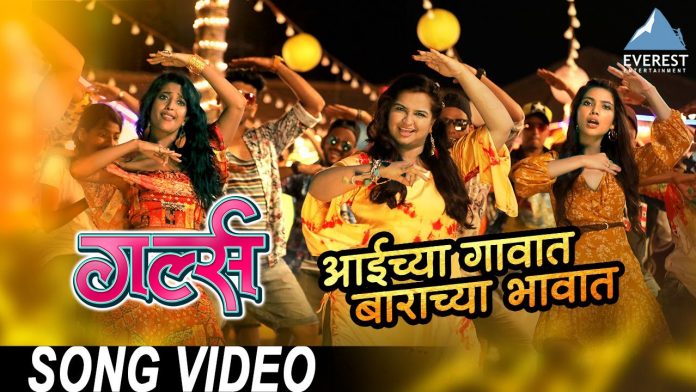 The different types of girls both attractive and rather plain and other varied types is the topic of the forthcoming film ‘Girlz’. Who are these Girlz?  And after getting an answer to this question another question arises, What are these ‘Girlz’ going to do? We will get to see a glimpse of this fun filled film in the first song released of the film ‘Aaichya Gavat’’ with the song too titled ‘Aaichya Gavat’.

The girls in the film are making merry and having fun in this song.  From the usual dreary days in the girls life the girls are leading lives at their own will and leading carefree lives which can be the envy of boys. The song ‘Aaichya Gaavat’ is composed by ‘Swapnil and Rohan which was tweaked almost thirteen times and even after the recording was done the music composer duo felt that something was missing and in the fourteenth recording of the song the music composer duo was okayed in  the song.  The music composer duo really had a strong will power to work on this almost perfect song.

Speaking about the song Praful and Swapnil  say, “ while the song was being composed we felt that something was missing and finally we got what we want in the fourteenth take and we took many a day to record this song but with our hard work and will power  and we went back on our earlier songs to know where what  went wrong and rectified our mistakes and composed this new song”.

The music composers have done due justice to the exuberant song according to the lyrics penned by Mandar Cholkar and will send foot-tapping dancers in a tizzy on the song which is highly energetic. The songs have been sung by Vaishali Samant, Kavita Ram and Mugdha Karhade. The high flying song has been choreographed by Sujeet Kumar.