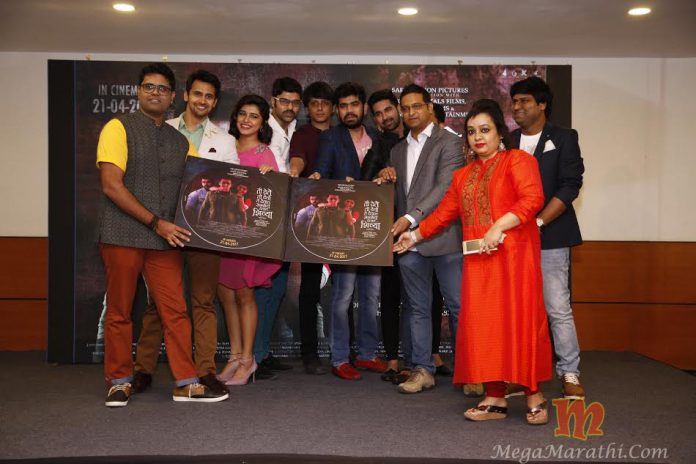 With a very interesting name the movie ”Ti Dete, To Deto, Te Detat, Saglech Detat Shivya’ will be released on 21st April. On ranga rang show this movie’s music launch took place. Bhushan Pradhan and Sanskruti Balgude as a pair will appear again on screen in this movie.
In the presence of the entire team the movie’s music launch took place. There are two songs in this movie. ‘Nilesh Lotankar’ has written the title song and ‘Shrirang Urhekar’ has put the song together and Anuradha Joshi has sung the song. Whereas the romantic song has been sung by Javed Ali and Sonali Dutt and it has been written by Deepak Gaikwad and the song direction has been done by Manoj Tikariya.

Abuses are a part of life and culture. Abuses appear in everyone’s conversations. A sudden event takes place in the life of a person who abuses on every second word and he realizes he can’t abuse anymore. Then what hardships does he goes through on such a rocking concept this movie is based. Sakar Raut has directed this movie. Story writing of this movie has been done by Sakar Raut and Nilesh Zhope. Sara Motion Pictures, Golden Petals films, Karma films and Rangmanch Entertainment have produced the movie. Dhwani Sakar Raut, Nilesh Zhope, Mihir Karkare and Akshay Palekar are the producers of the movie. Along with actor Bhushan Pradhan and actress Sanskruti Balgude, Piyush Ranade, Vidyadhar Joshi, Uday Sabnis and Shubhangi Latkar such talented actors are present.


While mentioning his views about this film director Sakar Raut says, ‘ We use abuses in our day to day life. While abusing we don’t even care about who is around us. Keeping abuses in mind this different variety of movie has been made. The movie’s music has been made very beautifully. Both songs are very pleasant to ear. The youngsters will definitely love these songs.