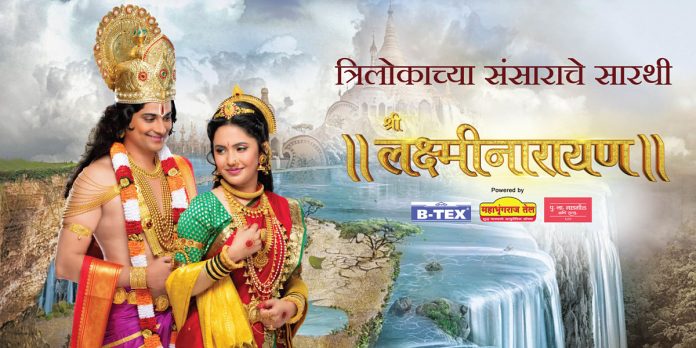 The goddess who has a golden tan, who is power supreme, whose presence spells goodness everywhere, and is a symbol of wealth and well being namely Goddess Laxmi who has been sought after very much by gods as well as human beings and demons as well but the Savior of Earth namely Lord Narayan is incomplete without Laxmi Goddess and if they come together there will be all well being on Earth. The tale of the celestial God and Goddess Laxmi Narayan is being brought on television on COLORS Marathi channel for Marathi viewers.

The entire team of the show has done deep research and studied the Vedas, puranas, Culture and our antecedents to bring this show to you. How the Goddess Laxmi achieved Greatness and the greatness of how Laxmi Narayan increased and the contribution of Lord Shiva and Lord Brahma in this creation of greatness of Laxmi Narayan and how their tale develops at various intervals. The opulent sets, incredible and interesting tale, powerful performances, is the show ‘Laxminarayana’ created by Santosh Aychit and the show is produced by Sajari Creatives . The show ‘Laxmi narayan’ starts beaming from May 27 Monday to Saturday on Colors Marathi at 7 pm.

The show ‘Laxminarayana’ is an epic show and this requires mammoth opulent sets , dialogues, and costumes for the actors to depict those epic times because in our holy epics the depiction of Gods and Goddesses is very detailed and so the show has too adhere to the depiction of Gods and Goddesses in the holy epics very minutely. (Also Read – New Show ‘Jeev Jhala Yedapisa’ Stars Soon On Colors Marathi ! )

The creative director of the show ‘Santosh Aychit says, “ The term of Shree Laxmi Narayan  is not a godly term in Maharashtra is not only a word of speech  used for the perfect couple and is cherished by everyone and when she comes it also brings ill luck, fear, worry , this tale of Laxmi Narayan will certainly attract the entire family is our entire teams desire. Our mythological literature has a different type of narrative telling and is strongly effective  and addresses all sections of society. The literature of our ancient mythologicals is very perfect for television. In this literature not much mention of Shree Laxmi is found. Its spread over in various epics. And not much on Goddess Laxmi has been seen on Indian television. And it needed to be told on Indian television and Colors Marathi has taken this initiative to tell this epic tale which is indeed great and has made me happy”. From epic ages mankind has been fighting to acquire Goddess Laxmi but she stays only in places where Lord Vishnu resides. Such a celestial powerful Goddess Laxmi and her coming together with God Narayana and this epic tale ‘Shree Laxmi Narayana’.

Catch Monday to Saturday at 7 pm  on COLORS MARATHI  from 27 May. Don’t miss it!