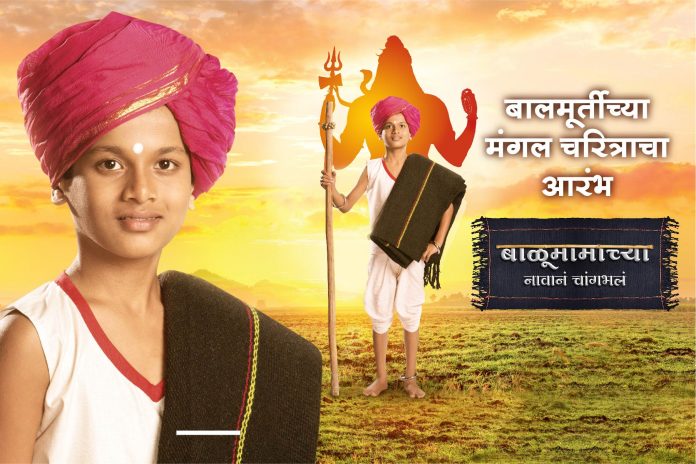 Colors Marathi has inspired us with the serial ‘Tu Majha Sangati’ for over three & a half years by unfolding the life of Sant Tukaram Maharaj. Now they are all set to tell the story of another great saint who inspired lots of people to give up bad habits & take up good habits.

‘Balumama’ was a saint born in ‘Belgaon’. He has followers from Maharashtra, Karnataka & Andhra Pradesh. Born in the ‘Dhangar’ community, Balumama used to take care of sheep & used to travel all over Mahrashtra, Karnataka to meet people who had problems & to solve those problems. His sheep are known to be very holy & they bring good fortune to people.
Even now the same sheep inherited from Balu Mama’s sheep exist & people consider them sacred! It would be very inspiring to our audiences to know Balumama’s story & learn how to do good for the society!

It is often said that God is always with those people who don’t have their loved ones. Everyone needs guidance and support at every stage of their life and if there is no one to help you out, we submit ourselves to almighty and seek his help. Several people have a belief that God comes to their rescue, and these people are ardant devotees of the superpower they believe in. Maharashtra is land of saints who have guided people to follow spiritual path and worship the supreme almighty.

One of these saints, ‘Balumama’, is believed to be Lord Mahadev’s incarnation and his life was dedicated to needy and helpless people.
Colors Marathi is now coming up with a serial based on Balumama’s life and will be titled as ‘Balumama chya Navane Changbhala’. The story has been written by Santosh Ayachit and the serial has been produced by Sajari Creatives.

Balumama was born in Akol village in a Shepherd community, known as Dhangar community in Maharashtra. Balumama was born to a mother who used to worshipped Lord Vitthal. She had a belief that child in her womb was spiritual and special one. This baby later became famous as Balumama and since childhood he used to help needy and helpless people. Very soon, the villagers started realizing that Balumama had some real powers and then they started believing him as an incarnation of God. On the other hand, there was a person known as ‘Devrushi’ whose only aim in life was to position himself as God in the minds of villagers. This new serial will unfold several facets of Balumama and his life.

Santosh Ayachit, director of the serial says, “Many gems are hidden in Maharashtra which have not been yet explored much. One of this is ‘Balumama’. Born in 1892, in a nomadic tribe, Balumama wandered in rains, winds etc along with his sheeps in Maharashtra and Karnataka. Meeting people of different castes on his way, he transformed their lives. The story is like a great epic and we are bringing a story of different timeframe for audience on Colors Marathi”.

A Balumama was a person who cleared the doubts and gave proper guidance to the people who had lost their paths. Today also, thousands of his followers worship him as a God. Balumama’s flock of sheeps are considered to be auspicious. Many of his devotees go to his devotional place in order to solve their problems and seek blessings. By saying “You do not come to me, I will come to you”, he supported many people. Audience will be able to see the character of this extraordinary person through this series.

The teaser of ‘Balumama’ is out & we can see a younger Balumama in it. Which means ‘Balumama’ was spiritually inclined from his younger days. We also see the shadow of Lord Shankar which also suggests how god was by Balumama’s side.The serial will begin it’s telecast from 13 August 2018, Monday to Saturday 07:30 PM only on Colors Marathi .