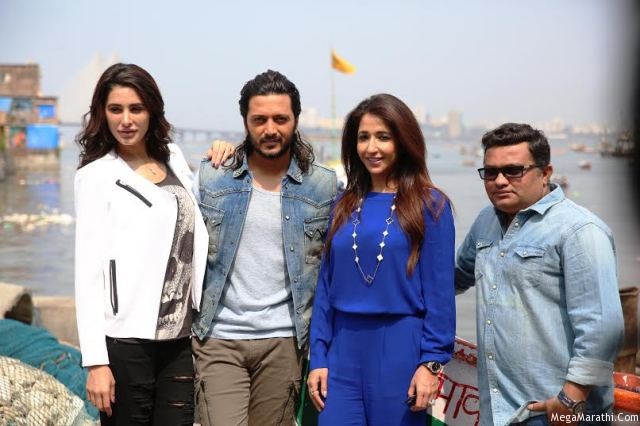 Here’s how Genelia D’Souza surprised Riteish Deshmukh and Krishika Lulla on the sets of Banjo!

Eros International and Krishika Lulla have recently announced its next venture, Banjo, starring Riteish Deshmukh and Nargis Fakhri, being helmed by critically-acclaimed filmmaker Ravi Jadhav. The first schedule of the musical drama is already on floors in Mumbai.

Since Banjo is being shot in Mumbai, Riteish’s wife Genelia D’Souza decided to pay him and the film’s producer and friend Krishika Lulla a surprise visit on the sets during the shoot. Riteish’s dearest wife also got homemade mutton for him, Krishika and the cast and crew.

“Genelia shares a good rapport with Krishika and she informed her to be on the sets on that day to taste the mutton specialty. Genelia also congratulated the successful producer for creating a unique set which looked so real,” the source adds.

Krishika says, “It was a really sweet gesture by Genelia to surprise all of us with her yummy homemade food. We really enjoyed having the yummy meal and had fun time on the sets by bonding with each other. Looking forward for the movie’s shoot to complete.”

Produced by Eros International and Krishika Lulla and directed by critically-acclaimed director Ravi Jadhav, the first schedule of Banjo, starring Riteish Deshmukh and Nargis Fakhri has commenced in Mumbai.