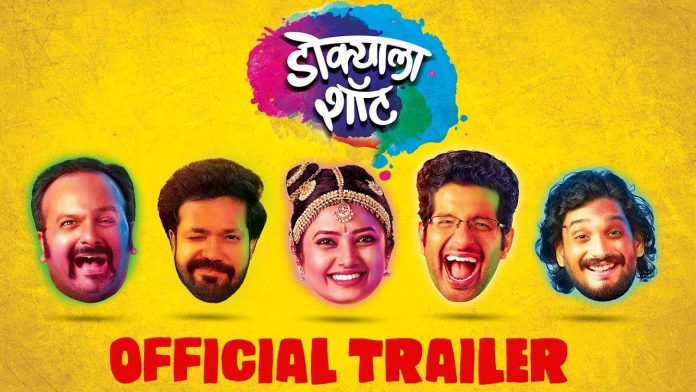 The much awaited film ‘Dokyala Shot’s trailer launch was held at the hands of Riteish Deshmukh and this event saw the presence of singer Kailash  Kher along with Riteish and the music launch of the film was held at the hands of Kailash Kher. The title is very interesting as is the lives of the four youths shown in this film. Suvrat Joshi, Rohit Haldikar,  Onkar Goverdhan, and Ganesh Pandit are four very good friends and their hilarious escapades will be the premise for this very funny film ‘Dokyala Shot’ and it will be a complete package of entertainmemt. Abhijeet (Suvrat Joshi) and Subbulaxmi (Prajakta Mali) are in love with each other and on the eve of their impending marriage an unexpected event takes place and changes their lives forever and takes the film to a different level.

The event which changes the lives of  Abhijeet and his friends and muddles them and how they get an escape route from the problems is the premise of the film. The friends have to walk on a tightrope of events and the situations which they have to face and how after much hardships they get out of these situations forms the funny part of the film. The film marks the debut of celebrated writer director Ganesh Pandit. While speaking about the film Riteish Deshmukh says, “  I saw the film and laughed so much that I fell off my seat . A beautiful film about friendship. We earn only one genuine thing in life and that is friendship. Our true friendship remains so till the end of our lives. So definitely see this different film but a sensitive film based on our lives and I promise you will walk away happy after seeing the film from the theaters and they won’t be disappointed”.

Kailash Kher was also a part of the celebrated guests and he has sung a song for the film too  and about his experience he says, “ I was also unaware about the meaning of the words Dokyala Shot and still then I gave my nod to sing  the song because I liked the story of the film very much. And I am very happy to be a part of  Marathi films again  and I didn’t want to let go of this golden opportunity”.

The film is produced by Uttung Thakur who has made acclaimed films like ‘Yellow’, and ‘Balak Palak’. Being so young Uttung understands cinema and has a yen for good stories he always strives to do something different every time.  And this different film ‘Dokyala Shot’ will be definitely liked by the audiences. The assistant director of many acclaimed films like Yellow, Nude, Balak Palak, Rege, Vidyasagar Parthasarthy will make his directorial debut with this film. The lyrics are by Guru Thakur and Chetan Saundane have written the lyics and the music is composed by Amitraj, and Srikant- Anita and sung by acclaimed singers like Mika Singh and Kailash Kher. The choreography is by the famed choreographer Fulva Khamkar. The background music is by Rohan-Vinayak. The DOP is Suman Shah. The event saw  producer Uttung Thakur,  music composer Vidyasagar Parthsarathy, Radhika Ksheersagar, Sameer Patil. Director Abhijeet Panse, and music composer Amitraj along with the cast and crew.