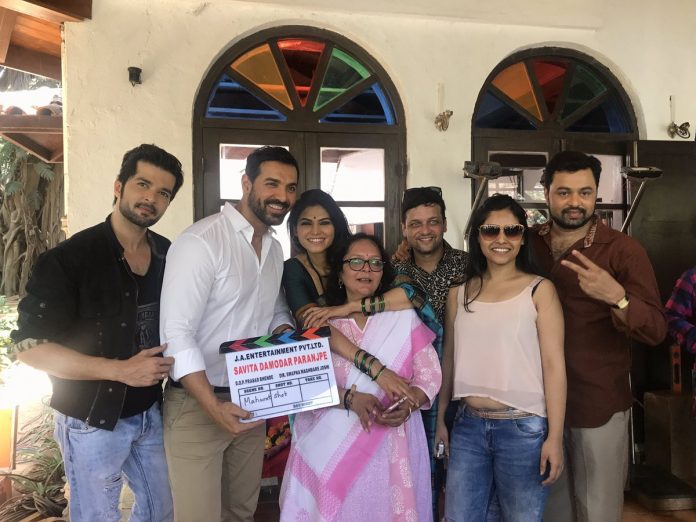 In 2012 a movie named ‘Vicky donor’ was released in Bollywood which was produced by John Abraham and it put forth a bold topic. Giving priority to a strong storyline till now John Abraham has produced ‘Mothers Cafe’ (2013) , ‘ Rocky Handsome’ (2016) and ‘Force 2’.

Always putting forth a different variety of story in front of his audience , John has now put his focus on Marathi film industry too. ‘Savita Damodar Paranjpe’ movie is being produced by him.

Priyanka Chopra, Vikram Fadnis and now John Abraham have taken a leap in Marathi film industry. The filming of movie ‘Savita Damodar Paranjpe’ has begun and information about it was uploaded by John himself on his twitter by sharing a photo taken on the sets of ‘John Abraham Entertainment Marathi Movie’s ‘Savita Damodar Paranjpe’s first day… I fell in love with this movies storyline. Finally I’m getting an opportunity to produce a movie.’ such was his statement on Twitter.

1st day of JA Entertainment's Marathi Film "Savita Damodar Paranjpe" Have been a big fan of this story. Finally getting to produce it 🙂 pic.twitter.com/aY5m1TfgWq

This is a thriller movie based on the story of how a woman takes revenge of a man who has betrayed her. John’s ‘Savita Damodar Paranjpe’ movie’s direction is being done by Swapna Waghmare the director of ‘Fugay’. Actor Subodh Bhave, Rakesh Bapat, Pallavi Patil and Angad Mhaskar have played the lead roles in this movie.