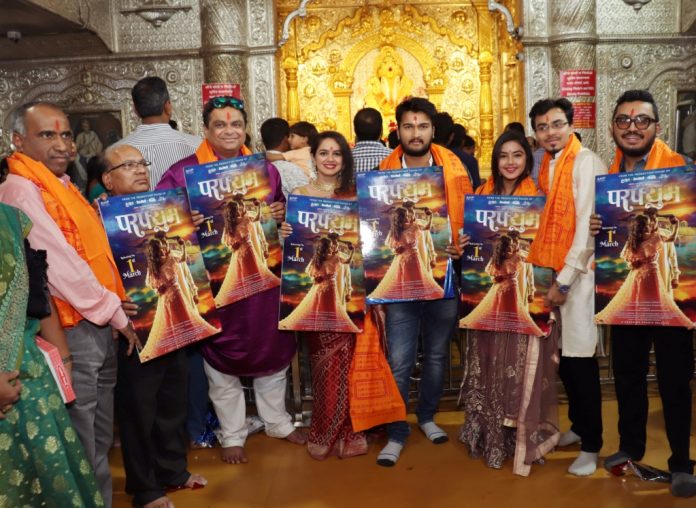 New concepts and new stories are the content of Marathi film now a days. Now such a sweet fragrance movie like ‘Perfume’ with an innovative love story is being readied for 1st March release all over Maharashtra. Recently the poster launch of the film was held at the much revered Dagdu Sheth Halwai Ganpati Mandir in Pune  in the august presence of the cast and crew. The producer is Amol Kangne of Amol Kangne films who has earlier produced the much awarded film, ‘Halal ‘ and the much acclaimed film ‘Lathe Joshi’and Laxman Kangne who too has produced ‘Perfume’. And the movie is produced by Hemant Dixit and Omkar Dixit of HR Filmdoms.

The lead cast of the film is Omkar Dixit and Monalisa Bagal and from the poster the genre seems like a romantic love story suspense thriller and that is why the curiosity factor of the film is at the top as everyone wants to know the plot of the film. And from the colorful poster we can assume the film is very colorful and vibrant. And that is the reason we feel the fragrance of this ‘Perfume’ will resonate in the air and please the audiences undoubtedly.

The DOP and the director is Karan Tandle and the story is by Kiran Girhe and the executive producer is Swapnil Dixit. The other cast includes the talented and experienced artists Chinmay Mandlekar, Abhijeet Chavan, Sayaji Shinde, Anil Nagarkar, Kamlesh Sawant, Bhagyashree Nhalave, Shilpa Thakare, Heena Panchal ETC.