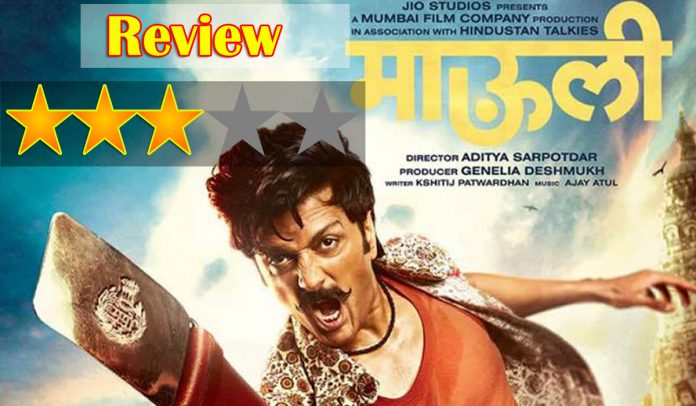 Riteish Deshmukh started his career in the Marathi film industry with the hit film ‘Lai Bhari’. ‘Lai Bhari’ collected record collections at the box-office. Now he comes in a new avatar to woo his fans in the role of ‘Mauli’.  Seeing Riteish’s action and performance in the film there is no doubt that his fans won’t be disappointed.

Mauli (Riteish Deshmukh) is a police officer who is posted at Kapoorgaon where a local goon has terrorized the villagers and carries on many nefarious activities like the water mafia, Land grab, wine distilleries, and killing people at the drop of a hat and he harasses the new inspector Mauli too . How will Mauli stand upto Nana the villain and face him and destroy him forms the crux of the story? The director Aditya Sarpotdar has started his first few minutes of narration by introducing most of the actors and so the film takes a slow start. But after a much twist in the tale the film becomes very interesting. But just when you think that there is a different script and scenario the film comes to a very routine and clichéd happenings. The audiences can predict what happens next and therefore the film becomes a bit boring.

But the saving grace is the performance of Riteish Deshmukh who has played the twin characters with great verve and enthusiasm and the various nuances he has lent to his characters is indeed admirable. Saiyyami Kher, Siddharth Jadhav ,Jitendra Joshi have lent good support to Riteish.  Genelia Deshmukh looks beautiful in a Holi song along with Riteish which is a treat for their fans. The action sequences of the film have been superbly choreographed. Credit goes to the dialogue writer too for his massy and punchy dialogues which will definitely be clap-worthy. The songs don’t linger much on your lips but the background score is a bit loud but effective. Don’t miss ‘Mauli’ at any cost!

The film has taken a bumper start and will be a blockbuster.