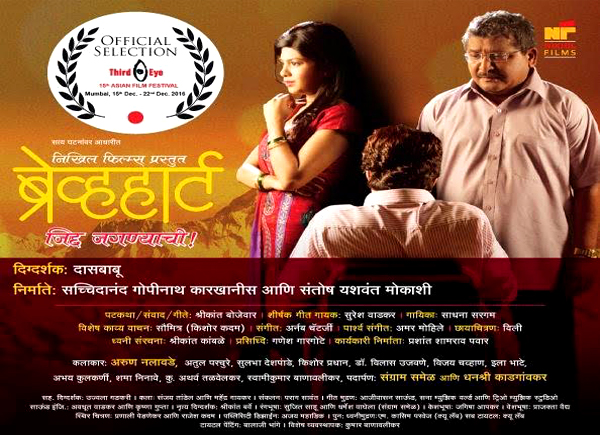 On Silver Screen various movies are going to be produced based on various innovative topics. Bengali Experienced Director ‘Das Babu’, brings an upcoming Marathi Movie ‘BraveHeart – Jidda Jagnyachi ‘ based on a true story. Nikhil films presents, ‘BraveHeart’ is selected in 15th Third Eye Asian Film Festival, which is going to start from 15 to 22 December 2016 at Mumbai.

Director Daasbabu has already directed popular Marathi serials like ‘Ladha’, ‘Shrimantachi Lek’, ‘He Bandh Reshmache’, ‘Ek Dhaga Sukhacha’ along with Marathi Movie ‘Tahaan’. BraveHeart is a story of indomitable willpower and determinant boy. The movie is produced by Sacchidananad Gopinath Karkhanis and Santosh Yashwant Mikashi. Screenplay, dialogues and lyrics by Shrikant Bojewar while music is given by Arnab Chatterjee. Background music is given by ‘Amar Mohile’ and resposibility of Executive producer is handled by ‘Prashant Shamrao Pawar.’