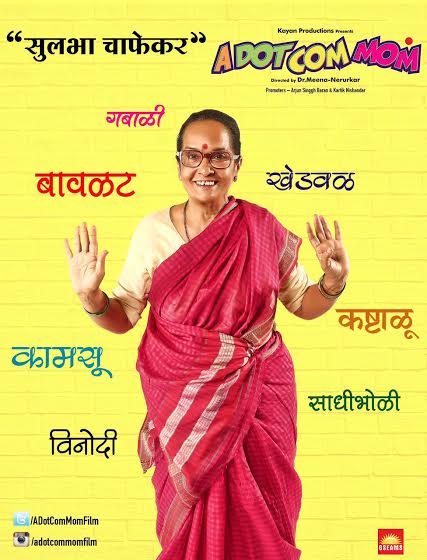 A well known name from Marathi Drama Industry Dr. Mina Nerurkar, who have given awesome dramas like ‘Sundara Manamadhe Bharali‘, ‘Awagha Rang Ekachi Jhala‘ is now became director for her first upcoming Marathi Movie ‘A Dot Com Mom‘. A movie is shooted in America and she is Producer,Director,Writer and also a choreographer. Dr. Mina Nerurkar has acted for movies like English Vhinglish, Slipwalk With Mi (Hollywood), Mr. Ravi and Mr. Hide (Hollywood).

The movie is based on emotional relationship between mother and son. A role of mother is done by Mina Nerurkar and Sai Gundewar has done a role of son. Its a story of mother who distracted when goes to America as she had not familiar with society and how she cope up with surroundings is a plot of the movie.

Sunil Jadhav is a editor of the movie, camera is handled by Vinayak Radhakrushna and Haidar Bilgrami. Music is given by Sudhir Phadke, N Dutta, Ashok Patki, Neel Nadkarni and Pratik Shaha. Songs are sung in the melodious voice of Devaki Pandit, Neil Nadkarni, Nida, Nilija, and Ankurma. The movie is going to release on 30 September.