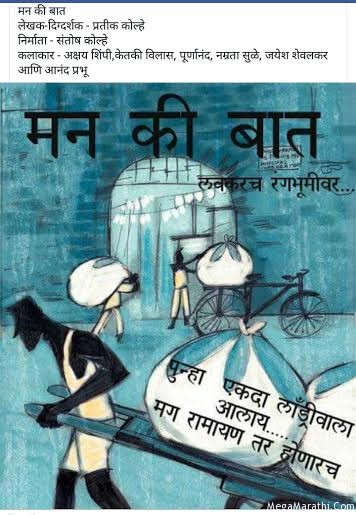 Written and directed by debutant Pratik Kolhe, new Marathi play ‘Mann Ki Baat’ is to be staged  soon.  Pratik , who has graduated from Mumbai University, with specialization in Theatre Arts, is  presently Non Fiction head, at Colors Television. He is behind concept and designing of many programmes on this channel.  Prior to this, he has gained considerable experience with Zee Marathi & ABP Majha channels.

This play is  produced by Santosh Kolhe, under his banner of Logical Thinkers in association with Sanvardhan Foundation. In the past, he has directed Marathi & Hindi TV serials and few films, besides producing Marathi serials. But, as a film producer, this is his first film.

‘Mann Ki Baat’ will present the attitude of a suspicious husband, who is doubting the chastity of his wife. Though, this play is not based on the backdrop of an episode from Ramayana, pertaining to ‘Agneepariksha’( The test of Fire), the theme however relates to the same issue, presented in present time. Over the years, every husband wants his wife to be pure and hence, this play is also based on this issue. What if, today’s wife has to undergo the same test that Sita had to undergo in Ramayana ? This is what the play has tried to show, how the social media and reality shows encourage such happenings.

The play also presents the selfish attitude of man; who, in spite of exercising all the liberties, wants his wife under his control.  The writer also wants the audience to think, whether there is really a third character in the life of the couple or it has been created by the man, with his own imagination. To make this play interesting, the writer has used some humor filled activities and dances, to make it entertaining. So, besides entertainment, it will also pass a social  message.

The lead artistes performing in ‘Mann Ki Baat’ are Akshay Shimpi, Ketki Vilas, Purnanad, Namrata Sule, Jayesh Shevalkar & Anand Prabhu. Music for this play has been composed by Rutwik Gautami Shankar, while production design is by  Swapnil Takle.Choreography is by Siddhesh Dalvi.