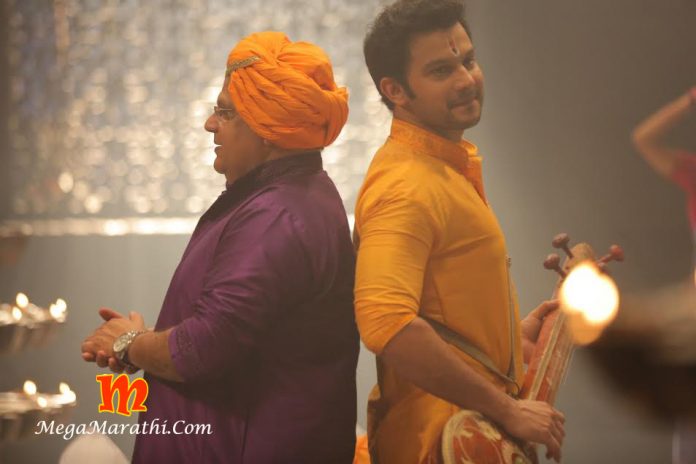 Actor, directorand creative producer Adinath Kothare talks about his journey in entertainmentindustry, how he stumbled upon various facets of production and his most ambitious project ‘Vithu Mauli’ coming up on Star Pravah
Take us through your journey in Entertainment industry.
Which was the turning point in your career?
My journey in the entertainment industry started as a child artistin a film ‘Maza Chakula’ which was directed by my father.Interestingly, I won the state award for best child actor for that movie. It was a very proud moment for the entire family though as a kid I did not realize the importance of all this. However, this sweet memory got imprinted for life. As I grew up, education was a priority;hence Icompleted my graduation in Biotechnology and MBA in finance. After that I had stints with Pritish Nandy Communications, Manmohan Shetty, Walkwater Media and PVR Cinemas.Then I produced my first TV show ‘Man Udhan Varyache’ in 2009 which was aired on Star Pravah.
Please share amemorable incident from your life.

I had assisted my father in a couple of films. I made short films and I was waiting for life to go about. I was all geared up to get into Direction. Acting,for me, was not planned, it happened to me on the way.One day suddenly my dad came up to me with an interesting script. I heard it and I was blown away by it. My dad asked me ‘Do you want to audition?’ He was searching for the main lead for this film but was not finding anyone suitable. Since I acted in my childhood, it was somewhere deep down in me. In acting once you taste blood, you never look back. I thought this is the right moment if I want to become an actor.This is the ideal kind of role I would love to debut with. I went with the flow and auditioned for the role and the producers just loved it. Thus,‘Ved Lavi Jeeva’ became my debut film. Since then my beautiful journey in acting continues and I am thoroughly enjoying it. I have been fortunate to get to perform different characters. So far I have done over 15 Marathi films.
What sort of research did you conduct for your upcoming show ‘Vithu Mauli’?

Kothare Vision is passionate about film making. We go out of our way to entertain the audience. For Vithu Mauli, we did year round of research. We have spent many days in Pandharpur, Alandi, Pune talking to experts. We have got some important scholars on board to guide us. All these efforts have translated into beautiful screenplay and storyline for the show Vithu Mauli which we all are sure that audience will love. We thank Star Pravah for the kind of confidence and trust shown in us. Star Pravah and Kothare Vision are working as a team to make this show the greatest show on Marathi TV. I am sure our efforts will be appreciated by the audience of Maharashtra.
What makes ‘Vithu Mauli’ a unique mytho serial?

At Kothare Vision, we believe in setting bigger challenges and breaking our records.We do something different every time in our every project. We made the cult mytho show Jai Malhar. We then produced Ganpati Bappa Morya which was bigger than Jai Malhar. We are now coming up ‘Vithu Mauli’ the biggest mytho show on Marathi Television. This will be broadcast on Star Pravah. This show is our dream project. Just like Lord Vitthal, the production is going to be larger than life. Vitthal is Maharashtra’s favorite deity. His devotees are spread across the World. In fact, Vitthal is such a God whose followers are not restricted to one religion. Vitthal as deity is a beautiful example of secularism and unity which brings people together. Story of Vitthal is really fascinating. We have the best team available which includes writers, DOP, VFX and entire production crew. We all are extremely gung-ho about it. Work is going on in full swing. Vithu will descend in every Maharashtrian household from 30th October onwards on Star Pravah at 7 pm Monday to Saturday.
What are your forthcoming projects?

My direction is on cards. I always wanted to do a film on water crisis in our country. The film is tentatively titled ‘Paani’. This project will roll out soon. As an actor, my upcoming film is titled as ‘Take Care Good Night’ Directed by Girish Joshi and produced by Mahesh Manjrekar. It has been selected at MAMI film festival. Of course, my most ambitious role is of a Creative Producer with Vithu Mauli on Star Pravah. Hoping for the best. Jai Hari Vitthal!