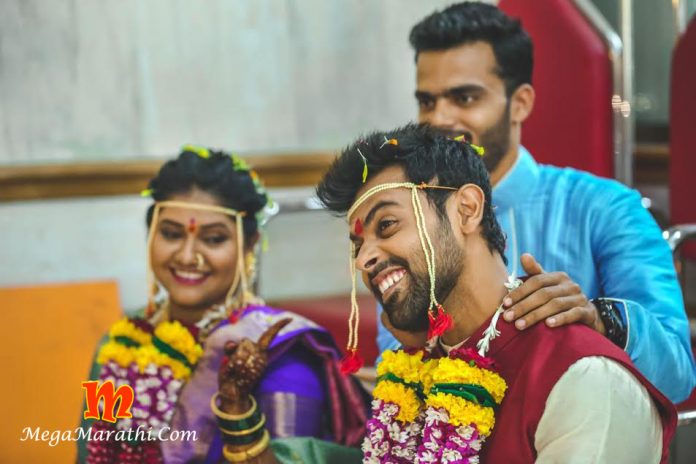 Rohan Gujjar has set a new precedent! Yes, as we all know everyone’s favourite actor from the hit tv series Love Lagna Locha got married recently. But it was a wedding party with a difference. When you think of wedding these days you imagine a rather lavish event. It will be held in a huge open-air maidan with nothing less a three-course meal composed of cuisines from around the world. And if a couple from the entertainment industry are getting married, then the event is even higher on glam quotient with the who’s who of the film world attending it. But Rohan Gujjar has broken this convention.

Rohan tied the knot with Snehal Deshmukh in a quiet ceremony attended only by his friends and relatives. Present on the momentous occasion were only 15 people close to both the bride and the groom.

Rohan not only won the hearts of the audience with his charming performances in the TV shows Honaar Sun Me Ya Gharchi, Bun Maska and Love Lagna Locha, but also the heart of his friend of a decade and a half – Snehal. After they decided to walk the aisle together, both of them were firm that they wanted a simple wedding.

Talking about the simple ceremony Rohan said, “I shared this wish of a quiet and simple wedding ceremony with Snehal and she too got convinced. Then we told our families about our plans for the wedding.

They were a bit disappointed first, but later supported our decision. We took this decision not to just save our money, but to spend these special moments of our life in the company of our family. Also, if a lot of people come to our wedding, even then we are not able to meet and mix with everyone.”

Rohan and Snehal, who is the digital head of Zee Marathi, do have a large friend circle. So the couple surely must have been at the receiving end of a lot of scolding from their friends. But their idea seems to have struck a chord with the same set of friends, as a few of them are seriously giving a thought to also getting married in a similar quiet, private ceremony.

Well, Rohan Gujar who is already back to work on the sets of Love Lagna Locha seems to have set a new trend here. What do you think?