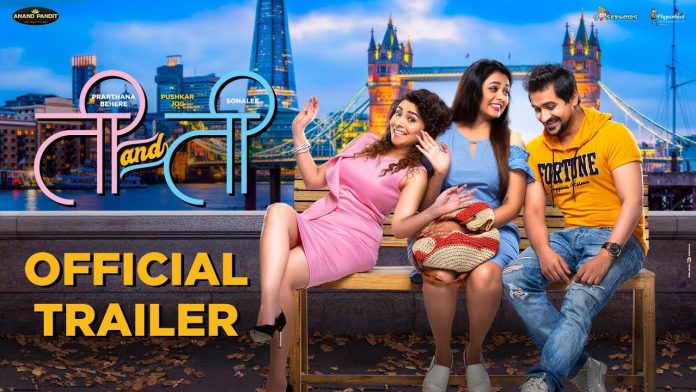 Director Mrinal Kulkarni’s ‘Ti ani Ti’ had its poster launched recently and all the audience is now waiting eagerly for a glimpse of the film and how much the big response to the poster is evident from the social network responses and for a few select audience the trailer of the film was screened. The film which has a leading cast of Pushkar Jog, Prarthana Behere, and Sonalee Kulkarni is an urban romantic comedy and the film has been shot in London.

The ‘Ti Kon’ and ‘Ti Konachi Aahe? Everyone is curious to know and might have known after watching the trailer. Every boy must have had that special ‘Ti’ in his life whom he must have loved and lost but can’t forget her. Similar is the tale of Anay (Pushkar Jog) and the two girls in his life Sai and Priyanka. The hint known about the roles of Prarthana Behere and Sonalee Kulkarni would make the audiences eager to know what happens next in this love triangle . There was a surprise in the trailer that Siddharth Chandekar is playing a small but important role in the film.  With this film we will get to see another directorial venture of actor Mrunal Kulkarni and the film has been shot in such a slick and colorful way that the audiences will definitely  fall in love with the film and applaud Mrinal Kulkarni’s directorial abilities.

The songs and background music has also raised the curiosity of the audiences. The film is a light hearted romantic comedy and has been written by Virajas Kulkarni and the new youth generation will certainly a liking for this love story.  Produced by Anand Pandit association with Goosebump Entertainmentand Hyperbis Media have presented the film. The producers are Pushkar Jog, Vaishal Shah, and Mohan Nadar and Mohan Chhabra is the co-producer. Rahul Haksar is the distributor of the film.And Rajat Enterprises is the nationwide distributor. This zany love story ‘Ti Ani Ti’ will release on March 1 2019.