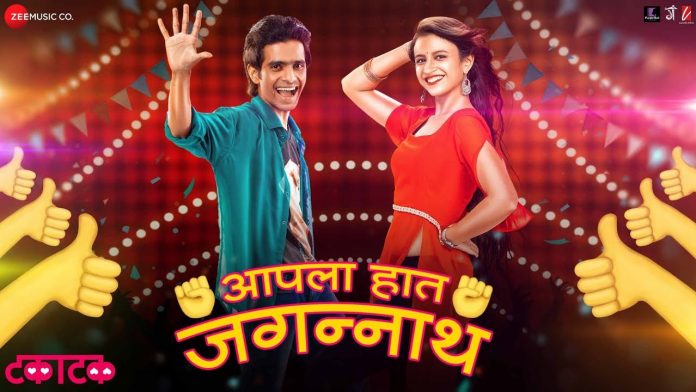 There is a strange relationship between songs, music and a film. The tradition in the film industry is to resort to the crutch of  a song or incident to see to it that a film succeeds in connecting to the maximum number of audiences. It is the main reason why even before a film is released, some of its songs end up becoming chart busters whereas  some songs become popular only after the film is released.

The song “Aapla Haath Jagannath…” in the film Takatak is extremely popular and has gone viral even before the release of the film.The song is popular at wedding ceremonies, haladi functions and various festive occasions. Also the audiences are able to gauge  the intense chemistry  between  the new pair of Prathamesh Parab and Ritika Shotri.

The trailer of Takatak which is slated for release on June 28 was unveiled on the social media amidst great fanfare and has generated a lot of hits too. The song “Aapla Haath Jagannath…” has become popular because it has been presented to the audiences well in advance even before the release of the film Takatak. Prathamesh Parab of Time Pass fame has been teamed romantically opposite Ritika Shotri in the film Takatak which has been produced by the banner of Purple Bull Entertainment Pvt. Ltd., V. Patke Films and  Gaonwala Creations.

Jay Atre has written the song “Aapla Haath Jagannath…” which has been crooned by Anand Shinde who has been gifted with a divine voice by God. Varun Likhate has composed the music for the film. The chemistry between Prathamesh and Ritika will be evident in the song picturised on the young romantic pair of Prathamesh and Ritika. It can be observed that even though she is new, and also Takatak is their first film together, Ritika does not at all lag behind Prathamesh in any way as far as spontaneity of her performance inconcerned.

It is the refreshing style of Milind Kavade to drive home the subtle social message through a serious issue based film. His earlier films bear a testimony to this. Milind Kavade has had the co-operation of  his producers like Om Prakash Bhat, Sujay Shankarwar, Ravi Bahry, Indrajeet Singh, Ajay Thakur, Dhananjay Singh Masoom and Ravindra Chaubey. Though Takatak is a sex comedy, the producers as well as the director have pains to see to it that there is no titillation or sleaze bordering  on vulgarity in the film which is out and out entertaining to the core. Besides Prathamesh and Ritika, the film  also stars  Abhijeet Aamkar, Pranali Bhalerao, Bharat Ganeshpure, Pradeep Patwardhan and Anandi Karekar who will be seen in different meaty character roles.

Besides directing the film, Milind Kavade  has also written the humorous story as well as the screenplay of the film, along with Ajay Thakur while Sanjay Navagire has penned the meaningful dialogues of the film for which Hajhrat Shaikh (Wali) has cranked the  camera.