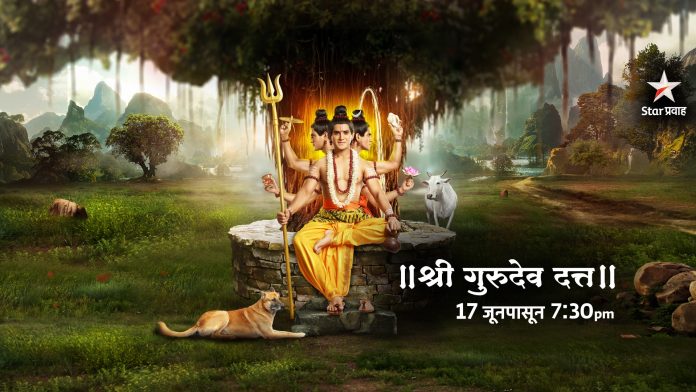 Whether it is Hindi shows or Marathi shows, mythological shows or devotional shows seem to be order of the day. After the stupendous success of ‘Vithumauli’ Star Pravah will bring another mythological show which depicts the greatness of Datt Guru titled ‘Shree Gurudev Datta’ which will be telecast on STAR PRAVAH from 17 June evenings  at 7.30 pm . How was Datta Guru born, his childhood miracles and tales of his mother Anasuya and his relation with her. The avatar of Datta Guru and its brilliance and his journey is indeed great.

The Shree Dattatraya and its rise and presence and its sway , he is the master of all three and he has three great qualities Satv, Raj and Tam  and that’s why he is termed as the Three Qualities Trimurti Shridatt in the old fables amd mythologicals and holy books . Shree Datt Guru is not a carrier of any bad qualities and doesn’t have any specific shape and this teacher  is closest to Lord Brahma and that’s why is anointed as the Teacher of the Whole World and to see the life of this great Guru on the telly will indeed be a pleasant experience . (Also Read – ‘Vithu Mauli’ – A New Serial of Star Pravah on The Occasion of Ashadhi Ekadashi)

Speaking about this magnum opus mythological show STAR PRAVAH Content Chief says, “ While narrating the story of this  great avatar we are feeling proud, pride and happiness,the triumvirate of the Three big gods Brahma , Vishnu, Mahesh has immersed itself in one avatar of Datta Guru. The show will narrate the story of Datta Guru right from his childhood. Born to Atri Rishi and Anusuya Devi and right from his childhood he was known for his varied miracles and this miracle power has been depicted in the show in different tales with state of the art special effects and spiritualism and truth . Celebrated actor Deepak Deolkar has produced this show and has been directed by Anil Raut  and Deepak Deolkar himself. The show has been written by Swami Bal and magnificent sets depicting that era are one more specialty of the show.

The show Vithu Mauli which was beamed at 7 pm  in the evenings was very popular and this show starting from 17 June evenings at 7.30 pm too will be as popular we are sure. This one hour episode seeped in devotional hues is being brought to you by STAR PRAVAH , so don’t miss ‘Shree Gurudev Datta’!