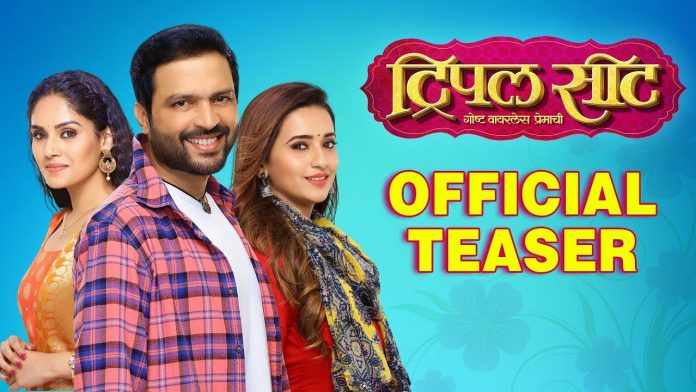 Some people who value their commitment for giving appointments and punctuality and their promises and they feel that it is the right way for life to pass by. Such a character is Krishna Surve in an entertaining film by Sanket Pavshe titled ‘Triple Seat’ to be seen in this zany teaser of the film. This film to be released this Diwali will be complete entertainment for the audiences as evident from the teaser of the film which is garnering a huge response on the social media.

Produced under the banner of Anushka Motion pictures and Ahmednagar Films Company the teaser displays star Ankush Chowdhary introducing himself as Krishna Surve who says we are just passengers in the journey of life with the steering in the Almighty’s hands. While he is saying this it is shown that he is surreptitiously entering someone’s house and searching for something. And at the same time the teaser shows a girl sitting in a dark room and calling Krishna Surve for help. Who is this mysterious girl? And will Krishna Surve help her? This will raise curiosity among the audiences. Big Boss fame Shivani Surve is seen in the teaser dancing to a song in the rains saying that every droplet of rain is her own song and she is getting drenched in the rain. And she is seen having a great laugh with Krishna Surve. But even Pallavi Patil is shown holding Ankush’s hands.

Therefore there is a great curiosity regarding what this twist  holds in the films tale. The film stars Ankush Chowdary, Shivani Surve, Pallavi Patil, Pravin Vithal Tarde, Rakesh Bedi,etc. The film produced by Narendra Shantikumar Firodia has story , screenplay, direction, by Advocate Abhijit Arvind Dalvi, and co-producer is Sanjay Munot, and Pushkar Shripad Tamboli. The music and background for the film is by Avinash Vishwajeet, and lyrics by Mandar Cholkar, Ashwini Shende, Vishwajeet Joshi and Guru Thakur.  The film having a strong cast and experienced technical crew is releasing on 24 October all over Maharashtra.