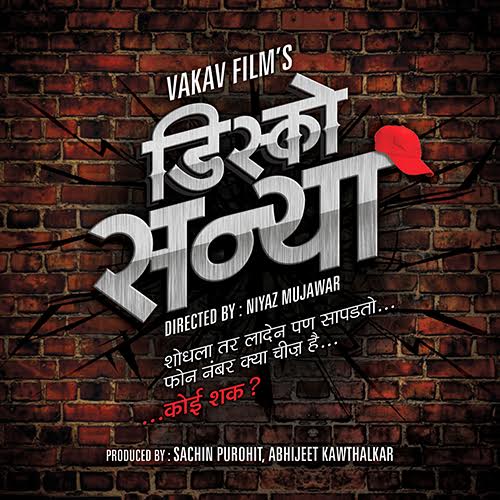 Eagerness of cinegoers has reached a climax for a film which has already created a firm space in their minds. The film is ‘DISCO SANNYA’ a presentation from Vakav Films. Recently the teaser of this film was launched on the social media platform. Due to the out of the box title of the film gossip is in full swing about the story line of the film. Considering the gossip galore the producers decided to launch the teaser of the film for the audiences as a first step. Vakav Films production of ‘DISCO SANNYA’ has been directed by Niyaz Mujawar and the child star Parth Bhalerao who stole limelight with Big B in Bhootnath Returns  arrives eminently in this film in a new look.

All of you must have been thinking about questions such as the real meaning of ‘DISCO SANNYA’ or what does ‘DISCO SANNYA’ mean? This is natural because the name ‘DISCO SANNYA’ that has arrived in Marathi Film world is going to be on the lips of everyone…You will also know the reason for the same very soon. Vakav Films have brought you the film ‘ DISCO SANNYA’ so as to convince you that entertainment does not only mean dance and song sequences or laughter but it also means a story with a totally mystery thriller. The eagerness about the film ‘DISCO SANNYA’ stems from this mystery. The first look at the ‘DISCO SANNYA’ teaser recently launched itself tells you about ‘DISCO SANNYA’. The extra strong dabang Avtar of Parth Bhalerao in a new look and a superb tone is going to be rowdy at its best. When Parth Bhalerao stands on a stone written with words Jai Chingabunga in a chawl environment and introduces himself in his inimitable tone “Is nacheej ko Sannya kahate hain… DISCO SANNYA” everyone in the audience is going to be under his magic spell. When he adds in his dabang style as “Koi shak?’ the eagerness of the audiences is stretched beyond limits and the LOGO of the picture takes care of the audience. The fresh and interesting chemistry between actors Parth Bhalerao  and Sanjay Khapare keeps you spellbound.

The promotional song of the film has been sung by none other than  Avadhhot Gupte.  Sachin Purohit and Abhiji Kawthalkar have produced the film. The lyrics written by Director  Niyaz Mujawar have been set to scintillating music by  Abhiji Kawthalkar and Sachin Purohit. Singers Adarsh Shinde, Nandesh Umap, Rishabh Purohit and Shabab Sabri have contributed their voices to the songs which will be found popular with people from all age groups. The Story and Screenplay of the film has been written by  Niyaz Mujawar,  Sachin Purohit and Abhiji Kawthalkar. The dialogues have been penned by Niyaz Mujawar.  Sandeep Patil has handled cinematography and  Bhaumik Shah has handled Choreography component. Siddharth Tatuskar is the Art Director, while Purti Kulkarni has designed the costumes and Santosh Gilbile has handled make –up. Film is edited by  Milind Damle . The PR work for the film is being handled by SIBA PR and Marketing Company.

The story of the film however has been kept strictly under wraps. Audience eagerness about “What is the meaning of DISCO SANNYA? has been increasing the heartbeats. However we shall have to wait a little bit more for the film to release.

Till then just think about what could DISCO SANNYA mean?