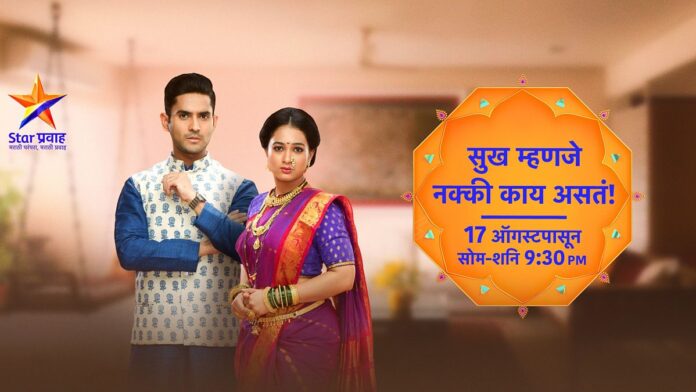 If you ask anyone what the real meaning of happiness is for them , everyone will have a different definition for it. For some money is happiness, for some spiritual bliss is happiness, and for some the sheer joy of living is happiness.  This definition of happiness will be revealed in the new forthcoming show on STAR PRAVAH titled ‘Sukh Mhanje Nakki Kaay Asta’. The show is produced by Kothare Visions and the director is the much famed Chandrakant Kanse. The USP of the show is veteran actor Varsha Usgaonkar in a prominent role who plays the character of Nandini. She is staging a comeback on the small screen shows after a long hiatus. Known for her glamorous roles , in this show she will be seen as a respectable mother in law , a completely different avatar.

Explaining the difference of this unique show, STAR PRAVAH , CONTENT HEAD, Satish Rajwade says, ” Sukh Mhanje Nakki Kaay Asta’ is a family show. It depicts the usual situations and challenges which confront us in our daily lives and how we face them and overcome them is the gist of the show. However strong we are we have to face destiny and whatever is pre-ordained for us and how we have to search happiness in such a situation is beautifully depicted in the show”.

The show stars Varsha Usgaonkar, Mandar Jadhav, Girija Prabhu, Madhavi Nimkar,  Sunil Godse, Ganesh Revdekar, etc in a formidable cast. Viewers might recognize Mandar Jadhav from his earlier show on STAR PRAVAH, Shree Gurudev Dutt , in which he portrayed Shree Datt. Speaking about his role in this show, Mandar says, ” I am doing another show for Star Pravah after Shree Gurudev Dutt and I am very happy about it. The show is set in Kolhapur and my character is called Jaydeep who has studied overseas and always fights injustice and this is his unique trait. He is the perfect son, perfect brother, perfect son in law, and he is the instance of perfection as depicted in his character. The audiences gave me a lot of love and affection for my earlier role of Shree Datt in the earlier show on STAR PRAVAH, Shree Gurudev Dutt and I hope the audiences like my role of Jaydeep as well.

This is the first show of actress Girija Prabhu and her character of Gowri in the show which she feels is a big responsibility for her. She further adds that she got to learn a great deal from the veteran director Chandrakant Kanse. The promos of the show have received a tumultuous response from the audiences and the show starts on 17 August and I am eager to gauge the response to my character in the show.

So dont miss this new show ‘Sukh Mhanje Nakki Kaay Asta’ to be beamed on STAR PRAVAH at 9.30 pm!