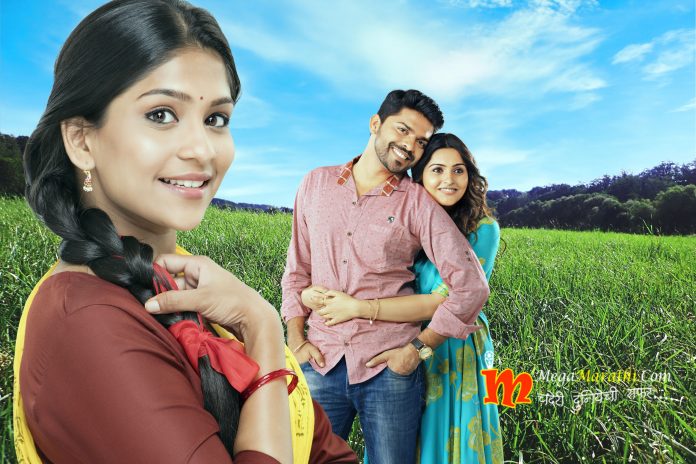 A simple girl from a simple family, Laxmi was brought up in a village blessed by Mother Nature, found solace in the green bushes and played till her heart’s content on the banks of the river that passed through her hamlet. Though she was the sweetheart of the whole village, the poor girl never had the fortune of being showered with motherly love as her mother passed away while bringing her into this world. It was Laxmi’s grandmother(Ajji) who stood behind her like a rock and brought her up with utmost care. But her maternal-uncle(Mama) always blamed her for his sister’s death. So on one had Laxmi is being showered with love by her Ajji, while on the other she has had to bear the brunt of her Mama’s perennial anger against her. But her Ajji keeps reassuring her that she would one day certainly find the man of her dreams. Laxmi carries this dream in her heart and longs for the day her prince charming would ask her hand in marriage and the two would then live happily ever after.

Meanwhile, Malhar, the son of a local dairy farmer, has just returned home to their village after completing his education abroad. He’s deeply in love with Aarvi, a doctor, and the two would soon be tying the knot. But one day Malhar and Laxmi bump into each other and magic happens. Is Malhar the prince charming Laxmi has been dreaming about? But he’s all set to marry his girl Aarvi. So will destiny ever bring Malhar and Laxmi together?

To know the answers to all these questions, don’t forget to watch Laxmi Sadaiv Mangalam from 14th May, Monday to Saturday at 7 pm on Colours Marathi.

Surabh Hande of Jai Malhar fame will be playing Aarvi in the serial, while Omprakash Shinde and Samruddhi Kelkar would be playing the lead pair of Malhar and Laxmi.

It is not very often that you come across a teaser of a TV show which puts across its theme in a minimalist, yet effective way. But the first promo of the upcoming Colors Marathi serial Laxmi Sadaiv Mangalam manages to do that rather successfully.

A couple is seen walking, hand in hand, close to a temple. But just then we see a woman running away from something and towards the couple, someone calls out her name (Laxmi) and she looks back, oblivious of the couple in front of her. She crashes into them and manages to loosen the strong grip of the couple. The woman falls down by the impact, but is immediately given a hand by her man. When asked whether he would always be there for her, he reassures her by saying that he will stand beside her like a rock, till his last breath. Laxmi quietly observes this deeply romantic exchange and wonders when she will find a man like him.

Well, it is not difficult to guess who the man of her dreams is going to be, is it? Though, the lead role is being played by a new actress, the romantic couple are both widely popular on Marathi television. Omprakash Shinde who was first noticed in Ka Re Durava later went on play the lead role in the hit TV serial Khulta Kali Khulena. The other half of the couple is played by Surabhi Hande who achieved unmatched popularity for as Goddess Mhalsa in the superhit serial Jai Malhar.

Laxmi Sadaiv Mangalam is a Marathi remake of the Gujarati serial by the same name. It’s about a young, cheerful woman who while waiting for the man of her dreams, brings joy and luck in the lives of the people around her.

The serial will be telecast on Colours Marathi from Monday-Saturday. It may be replace Saraswati serial. Well, it seems the channel already has a winner on its hand.