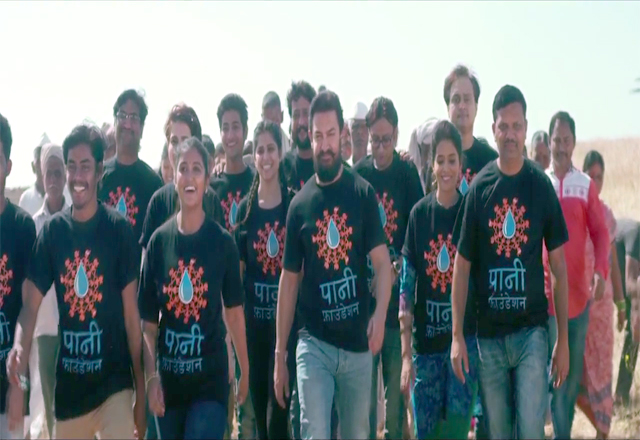 Both perfectionists to the see when it comes to their trade, Bollywood superstar Aamir Khan and Marathi film industry’s most bankable director in recent times came together to shoot a video with a social message. Directed by Manjule for the Paani Foundation, the five minute clip, that has already gone viral on the Internet, has the entire Sairat team — Nagraj Manjule, Aakash Thosar, Rinku Rajguru, co-actors, music director duo Ajay-Atul (Gogavale) — along with Sai Tamhankar, Sunil Barve, standing shoulder to shoulder with the King Khan, as they take shovels in their hands and dig trenches for water conservation and watershed management in Maharashtra’s arid landscape.

The music for the Paani Foundation video is composed by the duo and the song ‘Toofan Aala’ is sung by Kiran Rao and Ajay Gogavale.

Ajay Thakur has penned the lyrics that bring to you the hardships faced by the drought-affected farmers and their families of Maharashtra.

Interestingly, the video was launched on January 3, 2017 in Mumbai as part of Satyamev Jayate Water Cup’s second edition in the presence of chief minister Devendra Fadnavis.

To encourage villages across Maharashtra’s dry landscape Paani Foundation organizes a contest where they offer Rs 50 lakh, Rs 30 lakh and Rs 20 lakh as first, second and third prize respectively to the village that creates the maximum water storage capacity.

This year the competition period is between April 8 and May 22, a month before the onset of monsoons so that the Maharashtra adds more water in drought-affected areas. The last date for submitting applications for this contest in the designated talukas is January 31, 2017.