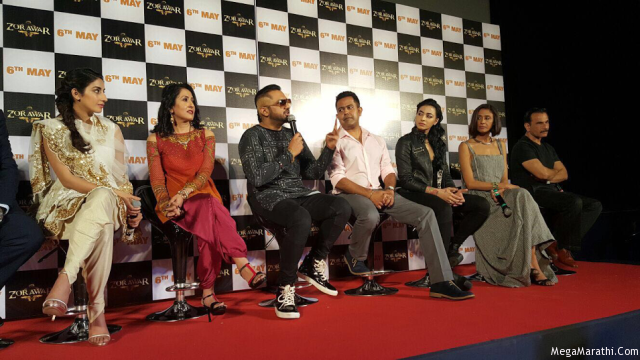 After rocking the music scene, popular rapper Yo Yo Honey Singh is all set to showcase his acting skills in his upcoming Punjabi action drama film, Zorawar, produced by PTC Motion Pictures, Rajiee M Shinde and Rabindra Narayan and directed by Vinnil Markan.

The trailer of Zorawar featuring Honey in a never-seen-before avatar is every bit a glimpse into an action-packed, roller coaster ride of a soldier Zorawar, essayed by the singer-actor, who will be seen performing high-octane stunts for the first time, all in style!

The trailer of the Punjabi action drama film was launched amidst a packed house by producers Rajiee M Shinde and Rabindra Narayan, director Vinnil Markan and Yo Yo Honey Singh.

With Zorawar being Honey’s first feature film as a hero, needless to say the music will be lapped by the youth with rocking numbers which will be a treat for Honey’s fans.

Talking about the film producer Rajiee Shinde and Rabindra Narayan says, “The audience will witness Honey Singh in a never-seen-before avatar for the first time in Zorawar and he has done a fabulous job as an actor. We are sure Honey will live up to people’s expectations as always and the audiences enjoy the film as much as we enjoyed making it.”

Honey says, “It was a great experience to do a full fledged action drama movie for the very first time. Thanks to PTC for making this project happen.”

Director Vinnil Markan says, “Zorawar is an intense thriller which has all the ingredients of a commercial entertainer. The hero had to be someone larger than life so who better than YO YO to play it. He approached the role with great fervour and focus and has done a stupendous job as though he were a veteran. It has been an amazing experience working with him.”

Produced by PTC Motion Pictures and directed by Vinnil Markan, Zorawar starring Honey Singh in the lead role is scheduled to release 6th May 2016.