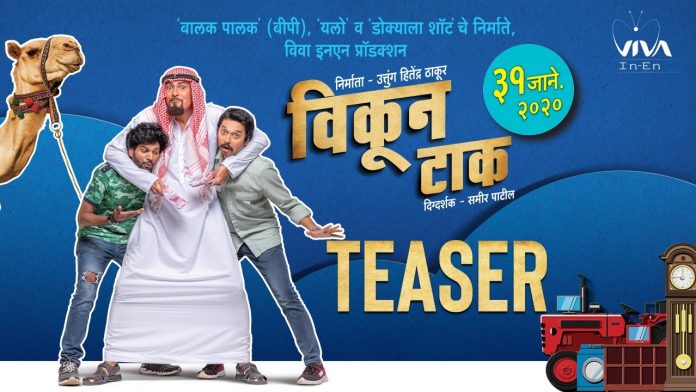 This new year, there will be a big laugh riot that says ‘Vikun Taak’. The teaser of Viva Inen Production and Uttung Hitendra Thakur’s ‘Vikun Taak’ has released & it’s here kick off the start of the new year.

Looking at Chunky Pandey in this teaser, the excitement about the film is has doubled even more. Chunky Pandey, who is always entertaining the audience with his humorous roles, is playing a hilarious role of an Arab Sheikh in the movie.

While Mukund played by Shivraj is preparing for his wedding, we see the entry of Abdullah played by Chunky Pandey. This ‘Abdullah’ becomes an ‘Uninvited guest’ at Mukund’s wedding and who becomes a life changer for Mukund.

Abdullah, who is no stranger to all, suddenly appears as Dutt in front of everyone and the film gets an interesting turn. Now who exactly is this Abdullah? Why does he come? Why and how do things in the village disappear? We will have to wait in anticipation till 31st January to find out answers to these and many more such questions.

Sameer Patil, who directed the comedy films like ‘Poster Boys’ and ‘Poshter Girl’, is also directing the movie ‘Vikun Taak’. Uttung Hitendra Thakur and Viva Inen Production, which produced hit films like ‘Balak Palak’, ‘Yellow’, ‘Dokyala Shot’ before the movie ‘Vikun Taak’ and Rajendra Bhanmali’s first work as a creative consultant. So be prepared for laughing your heart out this new year!

How excited are you for this comedy film? Let us know in the comments below!