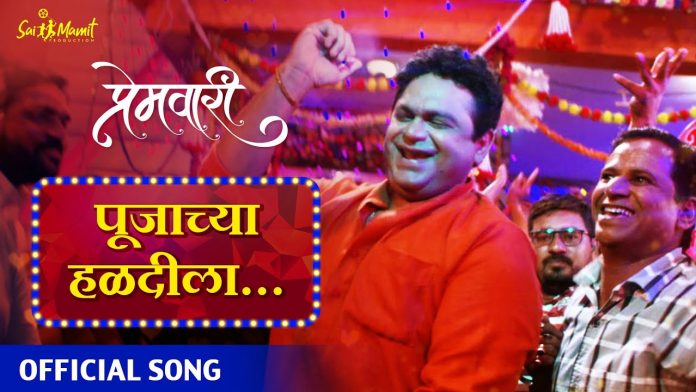 The song of ‘Poojachya Haldila’ from the film Premvari released recently. The song is a party song before the haldi ceremony in a wedding. The song will feature Bharat Ganeshpure and Abhijeet Chavan who will be seen dancing with gusto in the song. The film has been shot in Vari village near Shirdi in the house of the producer and director Rajendra Gaikwad. The house was decorated just like a house would look like before a wedding. The film was shot in two nights. The high on energy song has been sung by Amitraj and Adarsh Shinde. And composed by the very talented music composer Amitraj. The lyrics are by Mandar Cholkar. The choreography is by Sujit Kumar.

Prem is a very sensitive word. No one can define it in one word or one sentence.  Such a thought as its theme is being portrayed in the forthcoming film ‘Premwaari’ which releases on February 8 and it gives a new meaning to love. The film stars Chinmay Udgirkar and Mayuri Kapadne in lead roles .The romantic film co-incidentally releases in the Valentine week. The film produced under the banner of Saimamit Productions will bring different shades of love and language for the audiences. The film has been written , produced and directed by Rajendra Gaikwad. And he is also the presenter of the film.