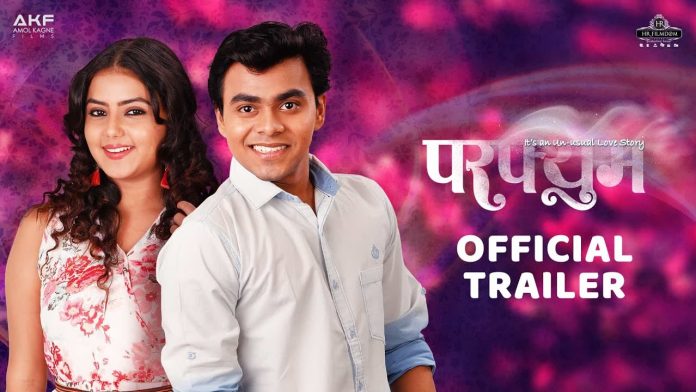 The lovey dovey lovers come together with their perfumed looks in college for the first time and how their lives take a thrilling turn is the gist of the film ‘Perfume’.  The trailer of the film was launched recently on social media and an interesting story line, superb performances, melodious music, and beautiful cinematography seem to be the USP of the film as evident from the trailer.

The esteemed producer of acclaimed films like ‘Halaal’ and forthcoming ‘Lathe Joshi’ Amol Kangne Films  and its proprietor Amol Kangne and Laxman Kangne have presented this film. And HR Films Dr. Hemant Dixit and Onkar Dixit have produced this film and Karan Tandle has directed this film as well as the cinematography. Omkar and Monalisa are the lead of the film along with Sayaji Shinde, Chinmay Mandlekar, Kamlesh Sawant, Abhijeet Chavan, Anil Nagarkar and Bhagyashree Nhalve and Hina Panchal in important roles.

The film has a story by Kishor Girhe and Paul Sharma has edited the film  and Swapnil Dixit is the production head. We have seen many love stories but ‘Perfume’ is a different love story. Starting from the sweet smelling perfumed college love story ,it takes a suspenseful twist and it changes the lives of the lovers. Whether their love story is successful raises the interest element as seen from the trailer and the curiosity of the audiences will be satiated when the film releases on March 1 all over Maharashtra.