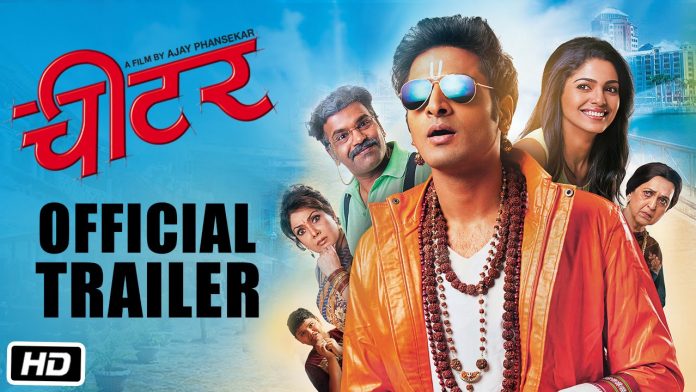 ‘CHEATER’ TO RELEASE ON  13 MAY ALL OVER MAHARASHTRA!

An actor- director who has created a special place in the hearts of Marathi  cinema audiences, Ajay Phansekar is bringing to his fans a new film, with a new novel subject called ‘Cheater’.

Abhay, a scion of a cultured well to do Agnihotri family does cheating and is in contrast with all the other principles of his family and his acts are totally against the rules  of his family . There is also the rich family of Bob Satam living in Mauritius   and he is a big industrialist who is living with his family members and he has bought a  grand villa in Mauritius a long time back. His mother is of the opinion that her grand daughter Mrudula should know Marathi culture and  the lifestyle of a Maharashtrian family  and so she is sent to Pune for studies and she meets Abhay and falls in love with him but Abhay is cheating her too and then there occur such events that Mrudula is forced to head back to Mauritius and does Abhay  fall in his own making of a trap due to his habit of cheating ? To find this, one has to see ‘Cheater’ the film.

At the grand bash of the trailer launch, the director Ajay Phansekar revealed that almost 80%  of the film was shot in Mauritius . And I got the full co-operation of the producers,  cast and the crew in the making of the film. He added that we had to surmount severe natural hurdles during the shoot of the film and we did it successfully and the genre of this film is different from the other films that I have made and I hope the audiences like my film.

The hero of the film Vaibbhav Tatwawdi says, ” I have played the role of Abhay Agnihotri in the film and and this boy knows only one thing and that is to speak lies, lies, and lies. And my character has shades that have never been seen before in any of my characters.

Pooja Sawant who plays the leading lady in the film spoke her mind on her role saying that  her character is called Mrudula but is addressed as Mimo by everyone  and I and Vaibhav  have worked together after a long time  and since my character is different, I enjoyed playing my role in the film.

There are four songs in the film, two sung by Sonu Nigam and Anandi Joshi, and the title track has been sung by Avdhoot Gupte and Urmilla Dhangar has sung a dance song of a folk variety called ‘Jhakri’ and is one of the main attractions of the film .

The DOP is Veteran B Laxman and the music Composer is Abhijeet Narvekar, a fresh new talent and the lyrics are by Akhil Joshi , a young lyricist and VFX effects are the mainstay of the film and are done by Hemant Shinde who has done the impossible possible.

The editor is Vinod Pathak, and art by Swapnil Keni and and choreography by Vrushali Chavan , Amit Baing and the Executive Producer is Sameer Sheikh.

The film  of a different genre is set to release on 13 May all over Maharashtra.