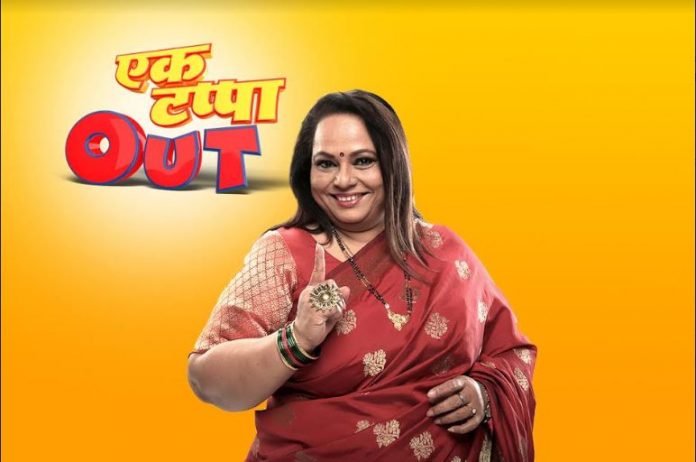 From 5 July Star Pravah Marathi will start beaming a new sit-com show ‘Ek Tappa Out’ . A group of best comedians will be selected from the various participants on this show. And to cut fine these comic diamonds are the mentors Johnny Lever and Nirmitee Sawant and Bharat Jadhav. On the eve of the telecast of this comedy reality show this is a brief interview with Nirmitee Sawant.

Nirmitee M’AM what is so different about ‘Ek tappa Out’?

Stand up comedy and the phenomenal comic talent of the participants can be termed as the USP of this show. Generally we see skits on television but this is the first time we will be seeing stand up comedy. And foremost is comedy kings like Johnny Lever from Hindi cinema and Marathi comedy king Bharat Jadhav will be judging the show. So when I was asked to be a judge on the show I immediately agreed. As a result of this show the rich content of comedy in Maharashtra will be on show on one platform in this comedy reality show which will be a treat for the audiences.

What do you have to say about the participants? Have you given any tips to them?

I am learning a great deal because of this show and I am also upgrading myself and to say this would be an understatement . The talent in these contestants and their exuberance is shocking. The first part of the show has been shot. And now seeing the first part I am happy that I agreed to be a judge on the show. Every participant has his own individuality. After acting in many genres of comedy sit- coms I am happy to work with STAR PRAVAH. We had a grand welcome on the first day of the show. This love and affection I hope will continue.

What is the atmosphere on the sets when comedy masters like Johnny Lever , Bharat Jadhav and you are present together?

We have gelled very well and we vibe with each other very well. After judging every skit Johnny Bhai also performs an act himself which I like. The whole atmosphere on the sets changes because of this and everyone is in a laughter mode. This gives a different side to the show. Also we have seen Johnny Bhai in films, stage programmes  but now seeing him, the Comedy King in person on television  is a rare treat.

The show title ‘Ek Tappa Out’ is different and distinct ? What is the meaning of this title?

Yes. Its based on cricket and there is cricket fever everywhere. New contestants need an avenue to display their talent. STAR PRAVAH has provided them with this platform. And to take full utility of this opportunity is in relevance to EK TAPPA OUT. And I think its an apt title. So don’t miss this new comedy show  which starts on July 5 On STAR PRAVAH Friday to Sunday at 8 pm.