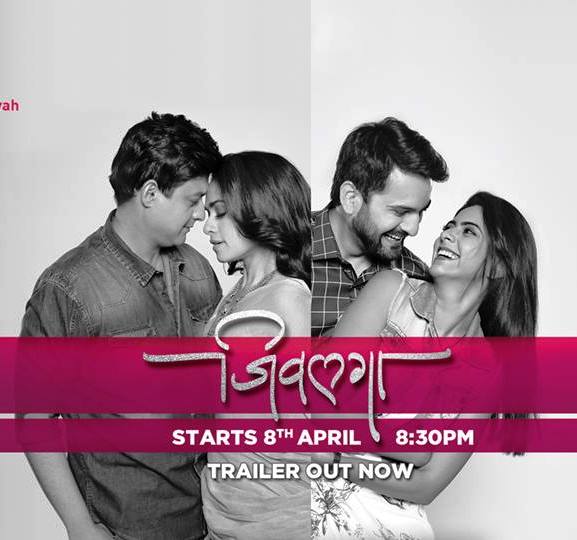 With new shows and excellent presentation the channel STAR PRAVAH has always entertained the viewers. And now such a show ‘Jeevlaga’ will start on STAR PRAVAH and the Marathi channel entertainment will take a huge step forward with this show. The leading star of Marathi cinema Swwapnil Joshi and the handsome hunk Siddharth Chandekar are returning back to television after seven and nine years respectively. And the glam queen of Hindi and Marathi cinema Amruta Khanvilkar will be seen in a daily soap with this show. Madhura Deshpande too will be seen in a different avatar in this show.

This star-studded  ambitious show  will present a very different love story with this show on STAR PRAVAH. “ Our heartthrob who we can see even after our eyes are closed he is Jeevlagaa ….we are living as a result of this heartthrob he is Jivlagaa” is the theme of this show starring Swapnil Joshi, Siddharth Chandekar, Amruta Khanvilkar and Madhura Deshpande that will lend glamour to the show  along with good performances from all of them.

The concept of this show is by Satish Rajwade. The show is inspired from a story by Dr. Chandrashekhar Phansalkar. The show is produced by Vidyadhar Pathare and is written by Parag Kulkarni and is directed by Umesh Namjoshi. and the show will be beamed on a numero-uno channel like STAR PRAVAH and all those who are associated with the show are happy about it. The show ‘Jivlagaa’ will explore the different shades of our relationships and the viewers will be seeing human nature and the maturity in it and a different way of thinking that will propel the tele-play of this show. Often we read wrong about the intentions of our relations and the price one pays in our various relationships and we sometimes doubt the very close people to us. The show sheds light on such strained relationships. The show also shows the power of love and the story will be loved by all in every family. “ The show Jeevlagaa will keep the viewers hooked as the love story in the show will be alive in the minds of the viewers for a long time. Even if the show depicts close relationships it will meander to different tracks too and it will be a first of its kind show on a regional channel with spectacular production values and STAR PRAVAH will always stand for star actors and good stories as this step first with ‘JEEVLAGAA’.

This show has a humane story with humane characters and one can see the human side to the characters in this show” says CHIEF CONTENT AND PROGRAMMING CHIEF  STAR PRAVAH, SATISH RAJWADE.  Star Pravah from the beginning has brought to the viewers good stories and good content shows. STAR PRAVAH will always stand apart from other Marathi programming channels and ‘Jeevlagaa’ is one such show which has talented and good actors.And that’s why there is a lot of curiosity among the views about the show. Don’t forget to see this show ‘Jeevlaga’ from 8 April Monday- Saturday on STAR PRAVAH AT 8.30 pm.