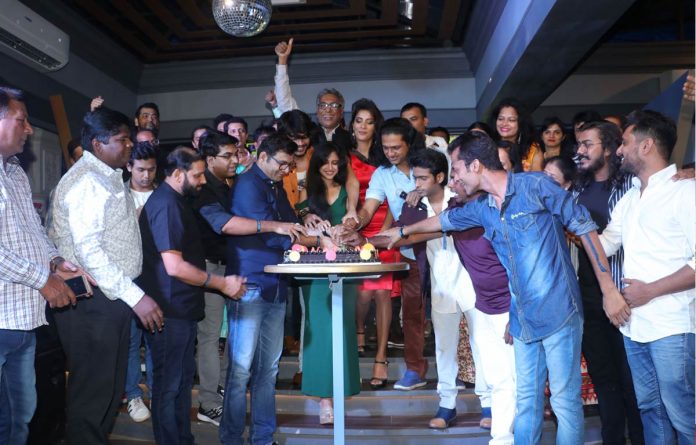 If you look at it objectively, the Marathi film film industry has gone through a severe drought in the first six months of the year and only around three films have succeeded at the box office out of 73 films. In such a period, a film like Takatak was released in the last week of June which was away from the usual stereotyped beaten track and also out of the box. The film took over the box office in a frenzy. Takatak directed by Milind Kavde has done an an amazing business of 14.27 cr just in 3 weeks all over the country and is now running in its fourth week.

To celebrate  the success of the film made under the banner of Purple Bull Entertainment Pvt. Ltd., V. Patke Films and Gaonwala Creations, actors Prathamesh Parab, Ritika Shrotri who play the lead in the film along with Pranali Bhalerao and Abhijeet Aamkar celebrated its success with a grand party. Prathamesh is happy that he has successfully shed the name Dagadu with which he has been associated till now and after Takatak is known by the name Thokya.  “I am very happy that Takatak has emerged as a big blockbuster hit besides affording me an opportunity to display my acting prowess in a different and daring role”, says Prathamesh.

It was big risk to make a sex comedy but the audiences have received the film overwhelmingly at the box office, says Milind Kavde, who adds that he is greatly indebted to the audiences . “I have always  tried to make something different and out of the box away from the beaten track and Takatak is not at all an exception to the rule. It was risky to present a sex comedy  but then one does not taste success without risks. Takatak has proved this and hence the success of my film isn’t only ours but that of the entire film industry”, he quips.

According to Milind Kavde, to a large extent, the success of the film belongs  to Om Prakash Bhatt, Sujay Shankarwar, Ravi Bahry, Inderjeet Singh, Ajay Thakur, Dhananjay Singh Masoom and Ravindra Chaubey as they did not at all interfere with him and lent him a free hand to direct the film though they are the producers. The producers express their happiness at having catered to, all sections of the audiences with their film and assert that  the success of the film has inspired them to make more and more films with a lot of strength and confidence in future. Distributors like Sameer Dixit and  Hrishikesh Bhirangi have also played a very vital role in distributing the film reach the maximum number of the audiences.

Prathamesh-Ritika, Abhijeet Aamkar and Pranali along with Bharat Ganeshpure, Pradeep Patwardhan, Ananda Karekar who also are jubilant about the film’s success, partied with vengeance.The song Aapla Haath Jagannath sung by Adarsh Shinde and the Jay Atre written romantic track Ye Chandrala Ya crooned by Shruti Rane have also emerged big hits. Varun Likhate has composed the music. Milind Kavde has written the humorous story and screenplay in tandem with Ajay Thakur while Sanjay Navgire has penned the meaningful dialogues and Hazraat Shaikh has cranked the camera with a lot of zest.