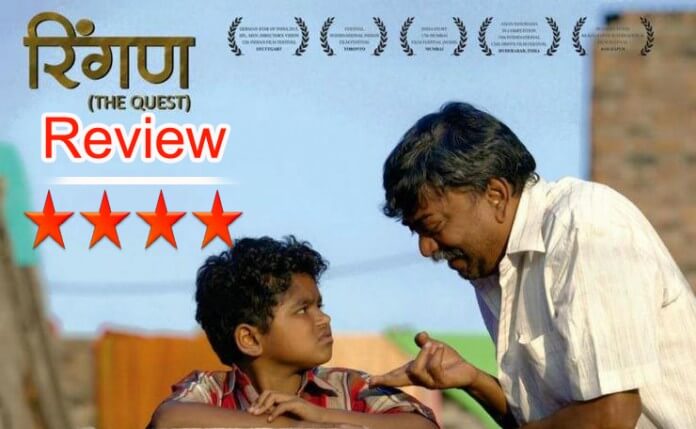 There is a constant drought, a lender’s debt for farming on regular basis, land for mortgages and house … finally there is no compromise for survival. There is a time when there is a question of for whom to live, and for a moment, when suddenly a farmer begins to commit suicide. In such a situation,it’s not that he did not think of children and wife. But the situation has been belittled, that he might not have way of escape rather than suicide. The same thing happens to Arjun Magar (Shashank Shende) Ringan’s hero. A lacquer loan taken for agriculture, a land plummeted by it, and only a one-year period for repaying debt … In this battle he gets nightmares of committing suicide.

… but he does not commit suicide. Because he has a child who has no mother, Abhimanyu alias Abadu (Sahil Joshi). Only by the love of the boy, he refuses to commit suicide, and he goes out of the village to do something, and finally goes to Pandharpur to ask for the answer to God, who is involved in the mischief.

Like the Arjun famine and the circle of loan, another sad incident is also surrounding Abadu. He is having no mother. Since he has no mother..he is determined to meet her. One day the father says that your mother has gone to God’s house. With this, Abadu takes a vow to go to God’s house, and when Arjuna comes to his village Pandharpur to ask God for himself about his mother’s whereabouts,he seems to be happy. He thinks he will get his mother here.

The pain of the grief of the father and son is different. But they get rid of that ring, in Pandharpur, how, that we see the movie ‘Ringan‘.. Actually not only for that reason, but for many other things, we have to see a Ringan. For the welfare of the farmers, for the tender love of father-son, for the simplicity of content and the complexity of the scenes. This film could have been decided by someone very determined. The pain of grief could be made more tight. But that would make loss of liveliness in the movie. Writer-director Makrand Mane should be appreciated for not losing that liveliness. The story of the real movie is not very new. The problem of farmers is forever. But the writer-director’s approach to dealing with it positively is different.

A scene in this movie is special. When in Pandharpur, the boy Abadu, mistakens a prostitute to be his mother ,when he sees his father talking to her. He continually watches her from a distance. One day, he directly hugs her callings her mother. Kalyani Rowdy’s eyes speak alot when she tries to explain him the situation. Abadu’s pain seems obvious in his eyes.

The character Arjun played by Shashank Shende and Abdu Sahil Joshi both have given the best with ease. Shashank Shende seems truly a debt-trapped farmer in the ringan, while Sahil Joshi misses his mother. Along with Suhas Shirsat, Shantanu Gangay and Umesh Jagtap. All of these Took exactly the bearing of their roles. Songs and lyrics in the movie have also done justice to situation

Importantly, if you want to find something great, then it may not be found in it. But the format of the genre is in the film, it HONESTLY is great!