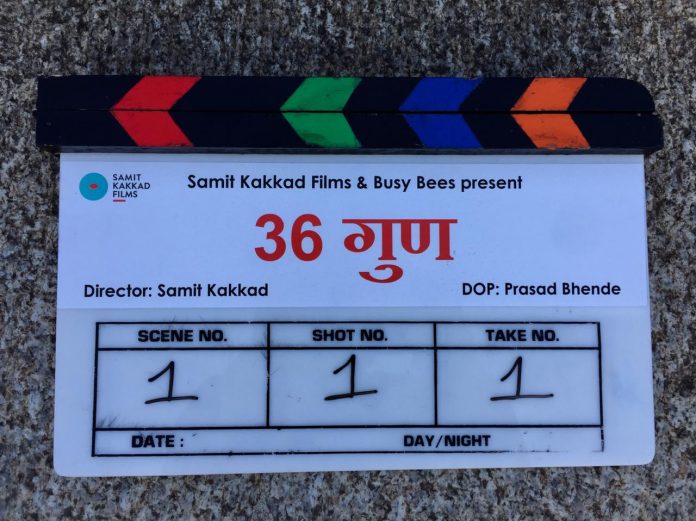 A very good combination of content and technique is the highlight of producer director Samit Kakkad’s film ’36 Gunn’ who has proved his mettle earlier  with acclaimed films like ‘Aynaa Ki Baynaa’ and ‘Half Ticket’ and is responsible for Marathi films getting an identity in national  and international film festivals and countries. Recently his film based on literature Sadat Hasan Manto’s story ‘Ascharya Chakit’ is much talked about after being screened in Netflix and he is getting a lot of acclaim for this film. And Samit is coming up with a Marathi film called ’36 Gunn’ which has been entirely shot in London.

The film is produced by Samit Kakkad and different subjects, different presentation and something new is the hallmark of every Samit Kakkad film. The remaining portion will be shot in Goa. Santosh Juvekar and Poorva Pawar are the leading stars in the film whose horoscopes have been matched by director Samit Kakkad Films and Mohan Nadar of Busy Bees Productions  making the film a must-watch. The writer famed for writing different and powerful subjects namely , Hrishikesh Koli  is writing ‘36 Goon’, ‘Bachchan’ and ‘Ascharya Chakit’for director Samit Kakkad who will rule the big screen in the forthcoming weeks. And his ‘36Gunn’ will no doubt make everyone ‘Ascharyachakit’.  Prasad Bhende is the DOP of the film. Parag Sankhe is the Line Producer of the film and he has done a lot for shooting the film in London.