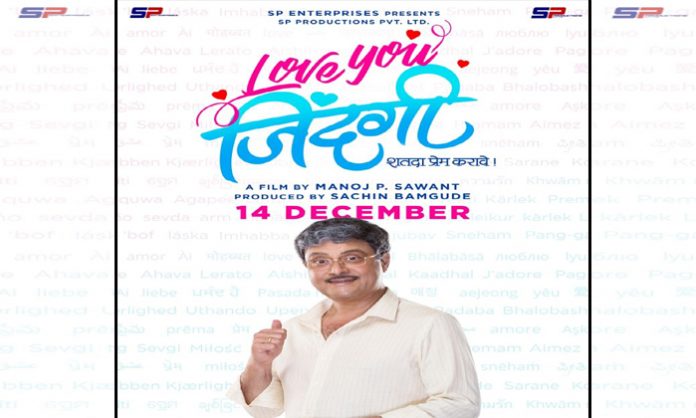 Some people enjoy according to their age while some people are always young at heart and behave like forgetting their age even after coming of age. Such situations give rise to comedy and tomfoolery. But both these type of people mouth ‘Love You Zindagi’ in the end. These two types of people and their stories are highlighted in SP Productions forthcoming film ‘Love You Zindagi’. The poster of the film was launched on the social media .The poster featured a simple middle aged senior citizen. This senior citizen was none other than our ever young, evergreen, everyone’s beloved and favorite Sachin Pilgaonkar. The unique point about this poster was the word love splashed in different languages.

This SP Films production is produced by Sachin Bamgude and directed by debutant Manoj Sawant who has been associated with ZEE TV, ZEE MARATHI, AND ZEE Cinema for the last 17 years. He has also written the story and screenplay of the film.

This ageless story about film which attracts the young and the old and lets them live life in the fast lane titled ‘Love You Zindagi’ releases on 14 December all over Maharashtra.