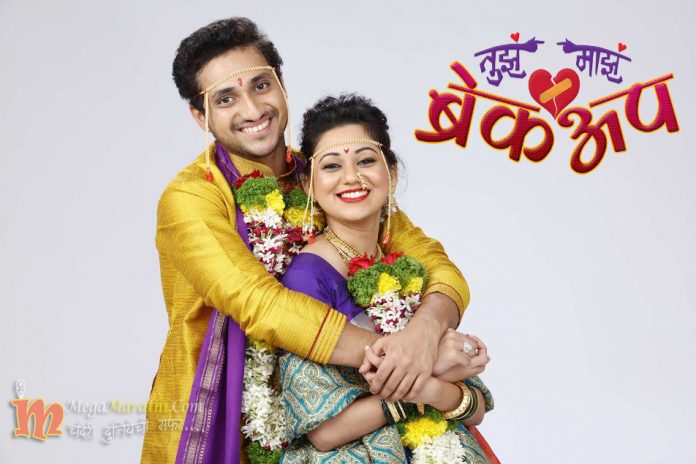 The bonds of a love marriage are only strengthened by love. But as time passes by, only the marriage bit seems to last, while love seems to disappear from the equation. The promises made before marriage such as being kind and unconditionally caring towards each other, always being together and never to fight with each other seem to vanish into thin air. And one can never predict, which flimsy excuse might lead to a fight. In a nutshell, this condition seems to be prevalent in the household of every couple who has got into a love marriage. Also the winds of conflicts and arguments are also very much visible. Such arguments prove to be a major deterrent to the strongest of bonds.  Such incidences occur due to the smallest of incidences and no one knows when and how a mountain is formed out of a molehill. Audiences will soon get to watch a story that is filled with several such light hearted examples of love and arguments in Zee Marathi’s forthcoming serial Tuzha Mazha Breakup. The serial will begin airing 18th September onwards at 8.30 pm IST every Monday to Friday on Zee Marathi.

Tujha Majha Breakup is the story of Sameer and Meera. Both study in the same college. And they never are able to fathom when their relationship transitioned from the classroom benches to the garden benches. Sameer is the beloved son of the Dhanadya Desai family. And he is especially the apple of his mother’s eye. Having lived a life of luxury and every demand of his met, Sameer has never had to face hardships and hence never knew what it takes to lead a disciplined life. On the other hand, Meera belongs to a middle class family who has been raised on a strict and disciplined upbringing.

She is an individual who is used to being independent and not being able to withstand anyone who handles things messily, fate conspires to make these diametrically opposite individuals fall in love. It is said that love is blind and it is marriage that helps to get over this blindness. And similar is the case with them. The initial days of marriage are soaked in love and bliss, but soon the reality hits them hard. Prior to marriage, any distance is unbearable and post marriage the same couple has great difficulty in putting up with each other. Soon, things get so bad that separation only seems the logical solution to this misery.

After getting separated post one year of marriage leads one to realize their love towards the other and soon they decide to reunite. But will this decision have the consent of their parents or not? And while reuniting how do they get over their mistakes of the past? And will this bond will ever see the love being reignited? This forms the consensus of the serial’s plot. People fall in love soon and then decide to get married in a haste. But do such couples know what it takes to lead a happily married life and how successful are they in the same? Audiences will get to know the secret behind the same when the serial goes on air.

18th September onwards, audiences will get to see this serial on Zee Marathi and Zee Marathi HD at 8.30 PM IST.