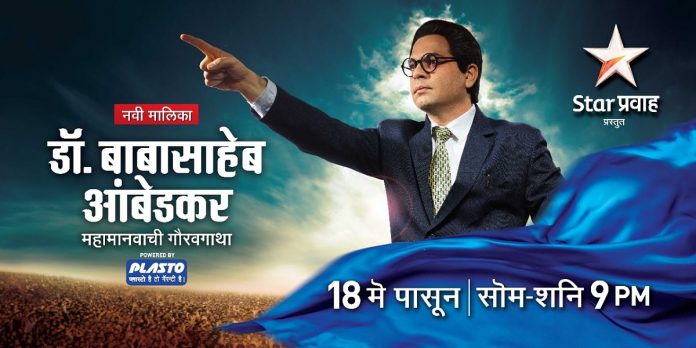 The father of Indian constitution and the leader of democracy in India has a life which can be termed as epoch making. Now STAR PRAVAH will bring the great man’s life on a television bio-pic. Dr. Ambedkar professed equality, brotherhood, democracy, freedom, global finance and politics and his views are still relevant today and a source of inspiration to all. His work is still an example for all to follow. And to project this great man’s life STAR PRAVAH is bringing this show to communicate his views and opinions to viewers all over.

Actor Sagar Deshmukh will be playing the role of Dr. Babasaheb Ambedkar.. We have seen Sagar in many roles earlier and speaking about Dr.Ambedkar’s role he says, “ It’s a great challenge  for me to essay the role of Dr. Ambedkar as his work is so inspiring and challenging and his personality  is so great and I am getting to know a new Ambedkar because of this show and I am getting richer as an actor while playing this role”.

Dr.Ambedkar because of his  vocal views on socialism , political, financial, educational, law  and journalistic gave a fillip to the lower classes in the country and became their voice and was responsible for lighting up their lives which were in darkness. And that’s why Star Pravah is bringing the life  and work of this  super human  as STAR PRAVAH is always bringing shows which are different, new  and appealing and that’s why STAR PRAVAH is a premier channel today and has its own identity. Dr. Ambedskar wanted to change society and wanted to see all classes of people as equals and no upper and lower classes was his idea of a classless society. And this was his firm opinion. He was very critical and angry on the exploitation of backward classes in society.

His every action professed equality  and brought lower  classes into the mainstream in society. His excellent intellect, global class of thinking, trying to revolutionize the society norms, art of bringing people together , his proficiency in English Language , voracious reader, and his studied and inspired writing , were the qualities of this  great  man  Bhimji Ramji Ambedkar whose journey changed the society of hundred  of years of  slavery and was anointed as ‘GREAT HUMAN DR.BABASAHEB AMBEDKAR ‘ and STAR PRAVAH will unveil the life of this great human being and don’t forget to see this show which starts on April 15 at 9 pm only on STAR PRAVAH.