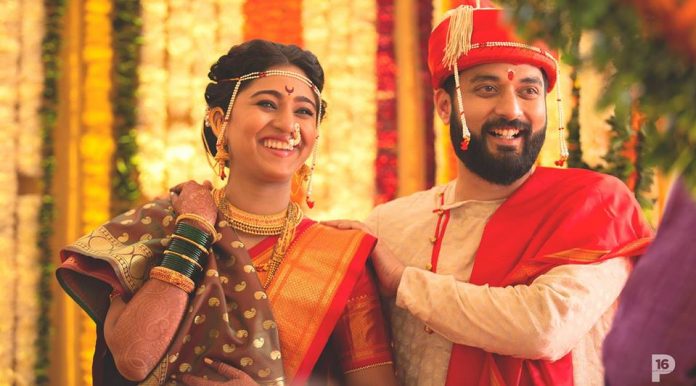 So, who’s the lucky chap, you must be wondering. Aren’t you?

Well, the Marathi cine star, who actually left a mark in the hearts of her fans with her fantastic performance in ‘Katyar Kaljat Ghusali’ and ‘NatSamrat’, tied the knot December 3 with businessman Swapnil Rao.

The ravishing lady’s Mehandi and sangeet photos have since gone viral on social media.

While the actor looked resplendent in a golden Anarkali during her Mehandi ceremony, her bearded beau Swapnil is no less handsome and stylish, looking at the pics that are being shared by the thousands on the social media.

The couple dressed to kill for the wedding with Mrunamayee draped in a gorgeous blue Paithani and Swapnil looked dapper in a beige Sherwani.

For another occasion the Mrunamayee-Swapnil pair sported black and golden sari with her beau showing off in a black, heavily embroidered sherwani.

While many of her fans would surely wish her well and bless her on her wedding, there could be many others too who could well describe the actress’ decision as a dagger drawn into their hearts (Katyar Kaljat Ghusali).

Mrunamayee was also seen in hit serials like Agnihotra and Kunku.

Megamarathi.Com Team wishes marital bliss and a happy and fulfilling marriage to the the winsome couple.